seashark
“A motorbike that you can drive on water drunk while churning up a fragile ecosystem? Yes please. The Seashark was 2011's #1 boytoy among the douchebag and mid-life crisis demographic. There are few things more fun than over-revving a Seashark up and down the shoreline, and it's a real treat for all the people who've come to the beach to relax.”

The Seashark is closely based on the Sea Doo RXT, as well as minor inspiration from the Yamaha Waverunner, in terms of the sides and rear seat "lips".

The Seashark is depicted as a small jetski with a rounded design, featuring a large hull that is reinforced with a black trimming surrounding the wide portions of the vehicle. It also has small intakes that allows the air flow running across the front section of the vehicle, passing directly below the rider' seat and exiting in the rear portion of the vehicle. The uppermost section features a small fairing with a small windscreen, two rear-view mirrors and the steering control with a black/light grey casing on it. The rider and the passenger sits in a twin seating where a small portion below the passenger' seat is colored black and features metal flooring.

The Seashark usually spawns with a two-tone color, where the body color is applied to the lower hull and the upper section, while a secondary color is applied to the trimmings around the middle section of the vehicle. The Seashark also features white stripes on the front portion and the back section, with several "Speedophile" markings on it, as well as a unique icon located in front of the rider' seat and below the steering system.

A special version of the Seashark is featured in Grand Theft Auto Online, added as part of the GTA Online: Executives and Other Criminals update for the Xbox One, PlayStation 4 and PC. It only appears when purchasing a Galaxy Super Yacht and is provided as a mean of transport. Like other yacht versions, it spawns in the colors of the yacht purchased - altering the color of the yacht will consequently alter the color of the vehicle.

While seemingly similar to the base model, this version ommits the front portion of the intakes, uses a differently-textured rear air exit and replaces the metal flooring with a plain one, as well as having slight changes in the markings (including a "Supercharged" badging on it and a tribal marking replacing the "2000" of the original badging). Several parts such the seats and trimmings can be recolored. 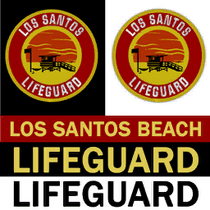 The Seashark has excellent acceleration and good top speed, but its top speed can be easily beaten by the Speeder and the Jetmax, although it makes up for its handling, with a very small turning radius and excellent maneuverability.

The Seashark is powered by a small inboard engine powering a small impeller that sends the water through a small noozle on the stern, creating a water jet that propels the vessel forward. Its engine noise sounds similar to the Stinger and the Stinger GT.

Artwork of Michael on the Seashark as seen on the cover art of the game.

The Seashark on the Rockstar Games Social Club.

The Seashark on the updated Rockstar Games Social Club.

The Lifeguard Seashark on the Rockstar Games Social Club.

The Lifeguard Seashark on the updated Rockstar Games Social Club. 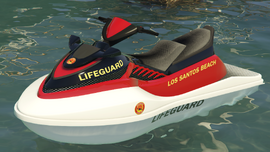 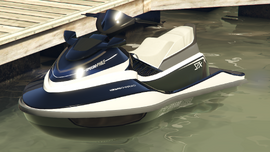