Wasted
Busted
Lyle gets away

Easy as Can Be

Brucie: "I need you to whack some people, only they're in hiding."
Niko: "How do I find them?"
Brucie: "Man, you're cold! You didn't even blink! I Love that! I fucking love that!"
—Brucie Kibbutz gets impressed by Niko Bellic's demeanour.

Search and Delete is the first mission in Grand Theft Auto IV given to Niko Bellic by Brucie Kibbutz.

Niko meets Brucie Kibbutz at his garage in BOABO. Brucie explains that Lyle Rivas has not repaid money he owes to Brucie, and he wants Niko to kill Rivas, and suggests Niko locate Rivas using a Police Computer.

First, the player will have to find a police car and then lose the inevitable wanted level once one is stolen, before accessing the computer. If the player takes too long to collect a police car, Brucie will send Niko a text message, suggesting to call the cops via cell phone.

The player is then required to access the police computer, select "police database", select "search by name" and dial in LYLE RIVAS, the computer will show that his last location was in Rotterdam Hill, Broker.

Once Niko arrives at Rivas' house and confronts him, Rivas will jump out of the window and drive off in his car. Rivas never stops and will just keep driving around the map until the player kills him.

After Lyle is killed, Niko phones Brucie and informs him that the job was done, and Brucie thanks Niko. 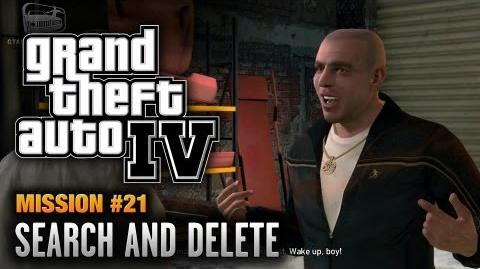