Standard White - 100%
“As the pilot of a Western Seabreeze, you'll have to get used to a lot of attention. Onlookers will marvel that an amphibious aircraft can look so sleek and businesslike. They will gaze in longing at the chic, contemporary interior. They will gasp and cheer as you try to bail out and that unique tail-mounted propeller turns you into soup. Welcome to your fifteen minutes of fame.
Please note: This aircraft is excluded from Pegasus Lifestyle Management and must be stored in a personal hangar.
”
— Elitás Travel description.

The Western Seabreeze is a seaplane categorized as a flying boat, featured in Grand Theft Auto Online as part of the GTA Online: Smuggler's Run update, released on October 28th, 2017, during the Halloween Bonuses 2017 event.

“Escape the ghouls and costumed crazies in style; whether you're landing on a desert runway or splashing down right next to your private yacht, the Western Seabreeze is a business class option for every occasion and locale. And if you’re the kind of high-earner who might have need of a machine gun and bomb bay, don’t worry, there’s plenty of room.”
— Rockstar Newswire description.

The Seabreeze is evidently based on the Seawind 300c, having the distinctive wing tips, cabin canopy and undercarriage arrangement. Its name is also a play on "Seawind", the manufacturer of its real-life iteration.

The Seabreeze is distinguished by its small fuselage with a boat-shaped hull, featuring a long nose with the correponding hatches for the nose landing gear and a large cabin canopy that swings backwards, having two handles on either side for two occupants. Around the main section, the plane features square-shaped wings with curved tips, ailerons and airbrake flaps, along with L-shaped main landing undercarriage that pivot from the main fuselage. The empennage/tail assembly is seemingly larger than most conventional planes, housing the single engine and dual exhausts on top of the vertical stabilizer and a wide horizontal stabilizer on the rearmost end of the vertical stabilizer.

The interior of the aircraft features a wide instrument panel with the "Flyer" dial set also used on most conventional aircraft, sharing the same arrangement with the Cuban 800.

The plane is prominently painted in a primary color around the main fuselage, while the underside/hull, the upper section of the tail, and engine compartment are painted in a secondary color. It shares the same wheel design with most industrial trucks such as the Mule, the Benson and the Phantom, also present on most aircraft.

The vehicle can be equipped with two built-in machine-guns on its wings, as well as bombs. 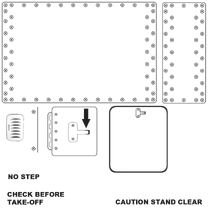 Despite the rather cumbersome design and the simplistic powerplant, the Seabreeze has great speed and good handling, even able to match other fast propeller aircraft like the Mallard or the Howard NX-25. However, players should be constantly correcting their pitch angle, as it often pitches down at cruise speeds, especially while suffering turbulences.

The location of its propeller means there is no risk of scratching it with an obstacle or accidentally killing other players/NPCs in crowded areas when the plane is on land, only requiring to avoid any kind of structure that may damage the same (i.e. the top of a tunnel or a bridge when flying below it). Its amphibious capabilities and the tricycle landing undercarriage offers high versatility when the player wants to bring the plane from sea to land. Care should be taken when performing sharp turns when taxiing around, as the aircraft will tilt to a side.

Unlike the Dodo, the Seabreeze can be fully submerged and has very high resistance against water damage. If, however, the Seabreeze should be damaged, its propeller will fail and start to nosedive towards its doom with no way to keep the plane straight unless if it lands on the water. In addition, its ailerons/flaps do not seem to break in any way when making contact with water, able to withstand stormy waves and rough water landings. Only landing upside down will effectively render the plane unusable, as the engine will not provide enough power to lift off the plane and end up stuck, as expected from a flipped boat.

Based on the shape and the protruding exhausts, the Seabreeze may be powered by a horizontally-opposed (flat) piston engine, with a distinctive sound similar to that of the Rogue, albeit with a higher pitch.

The Seabreeze is generally good at evading homing missiles thanks to the countermeasures and its maneuverability, although the lack of armor and heavy weaponry makes it rather ineffective on offensive purposes. 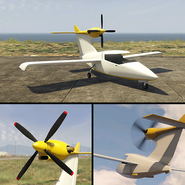 The Seabreeze on Elitás Travel.

The Seabreeze on the updated Rockstar Games Social Club.

The Seabreeze in a cinematic preview on the Rockstar Games Social Club.

Seabreeze logo that used in an advert and several liveries. 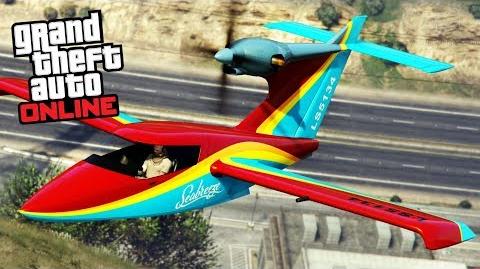 Other amphibious aircraft in the Grand Theft Auto series: