Standard White - 100%
“One day, and it's always sooner than you think, you're going to find yourself in a position where you need to stage an amphibious landing in a fragile miniature helicopter capable of firing off dozens of rounds a second. And you're going to look back at this moment, right now, and be very glad you made the right choice.

This aircraft is excluded from Pegasus Lifestyle Management and must be stored in a personal hangar.

The Sea Sparrow is an improved version of the Sparrow and is based on the Bell Model 47 "Sioux". It features pontoons attached to the landing skids and a single greyish color for the fuselage. The vehicle is equipped with a machine gun mounted below its fuselage.

The Sea Sparrow returns in Grand Theft Auto Online with a similar design to its 3D Universe iteration. The cabin is derived from the Sikorsky S-300 (formerly Hughes 300 and Schweizer 300), with a few tweaks to it, while retaining the tail setup from the Bell 47. The engine and the middle section are very similar to that of the Aérospatiale Alouette II.

The helicopter has a small and rounded cabin with a framed tail similar to its previous iteration, but has a three-bladed rotor with silver details on the upper surfaces, while the pontoons are located much farther from the aircraft itself, resulting in a larger profile. The same pontoons are similar to the floating portion of the Dinghy, while the side access steps are similar to the Dodo. The interior of the cabin uses the same "Flyer" dial set, with an arrangement similar to the Buzzard and its attack variant. The Sea Sparrow’s windows won’t shatter after collisions or by being shot at, but bullets will still go through and damage the people inside.

Unlike its previous iteration iteration, the vehicle does not have any weapon by default, but can be equipped with one via customization, either a Minigun based on a GAU-19 gatling gun or a small missile launcher with four tubes inside.

In all of its appearances, the Sea Sparrow has the same performance as the Sparrow, but has the ability to land on water (just like the Leviathan). This makes the aircraft a good choice to collect Oysters in GTA San Andreas. On the water, it will be steady and can be accessed easily. The Sea Sparrow has good handling and has quick maneuvering, just as its basic counterpart. While on water the Sea Sparrow's rotors can spin to full speed instantly.

Similar to the regular Sparrow, the aircraft is powered by a single piston engine, and shares the engine sound with the Maverick and its variants.

The Sea Sparrow also has a .50 caliber machine gun, which is very similar to the Hunter's. Just like the Hunter, it is capable of automatically locking on and shooting at targets in a ~45-degrees radius. The gun can lock on to pedestrians, as well as vehicles, and due to the gun's high firepower, it can make short work of groups of enemies and vehicles.

The performance of the Sea Sparrow is very similar to the likes of the Buzzard and Buzzard Attack Chopper, which is expected given its compact, lightweight design. The helicopter's handling is very nimble, but remains relative stable, allowing the player to perform quick maneuvers, however it can be noted that the Buzzard seems slightly more stable. When fully upgraded, the Sea Sparrow is barely faster than the Buzzard, reaching about 140 knots at full throttle compared to the 135 knots of the Buzzard. In addition, when flying at full speed, the aircraft will slightly climb, where the Buzzard will descend.

The Sea Sparrow is slightly more versatile in that the helicopter can land on water. However, because of its light weight body and the nature of water in the game, the Sea Sparrow tends to float away from the player after landing, more so than the slightly heavier Dodo sea plane. Care should be taken when landing on water also, as it can easily begin to flip upside down if the player comes in to land too fast or quickly, submerging the rotor blades and destroying the helicopter. The design and positioning of the pontoons also provide a smoother landing on most surfaces and greater stability on uneven terrain, albeit having a tendency to slide on steep inclines due to the lack of grip.

The vehicle is powered by a single turboshaft engine, which produces the same rotor sound as most regular helicopters.

The aircraft is unable to equip countermeasures but its maneuverability should allow the pilot to avoid most standard homing missiles.

The Sea Sparrow can equip a pilot-operated weapon mounted below the cabin, which only one can be installed at once:

Official screenshot of the Sea Sparrow. 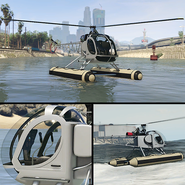 The Sea Sparrow on Elitas Travel.

The Sea Sparrow on the updated Rockstar Games Social Club.

The Sea Sparrow in the cinematic preview on Rockstar Games Social Club.

A Sea Sparrow floating on water. 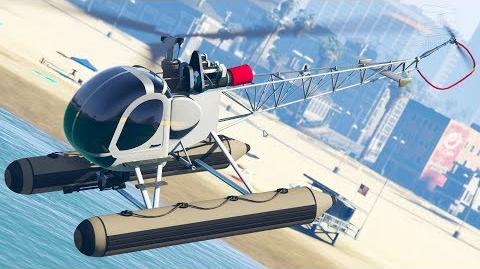