GTA Wiki
Register
Don't have an account?
Sign In
Advertisement
in: Races, Missions, Missions in GTA V,
and 4 more

View source
watch 02:56
Raise a Floppa - The Loop
Do you like this video?
Play Sound
You may be looking for Water Races in Grand Theft Auto Online.

Sea Races are a side mission in Grand Theft Auto V.

There are four different Sea Races in GTA V. They become available after the mission Hood Safari.

Unlike the Hao Street Races, the sea races can be completed by any Protagonist like the Offroad Races. Earning medals in races counts towards the Hobbies and Pastimes part of the 100% Completion in GTA V.

The player needs to go to the race location, swim up to the Seashark and press RIGHT on the D-Pad. If the player is already riding a Seashark up to the race start point, they do not need to mount the spare craft and can enter with the one they are already on by just pressing the RIGHT D-Pad. The player is required to race through checkpoints against different AI competitors.

An advanced catch-up mode is in place whereby if the player falls off or lags behind, the AI is slowed to allow the player to get back in contention, and if the player is out in front, the AI will always be able to keep up within a few lengths but not overtake unless the player makes mistakes.

There is no monetary reward after completing the water races. 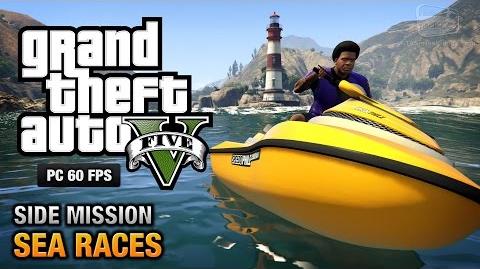