The Scuba Gear consists of a jacket with a few weight compensators and a single tank mounted on the rear. The air tank features two main hoses: the main hose, which is connected to the wearer's mask and regulated by a two-stage regulation system (a primary one in the air tank and a secondary one on the mask); and a secondary hose, connected to an uninteractive inflator valve. A diving lamp is attached next to the secondary hose, on the same height as the chest area. All the three characters have different colored scuba gear masks to correspond with their signature color.

The gear allows the player to dive underwater without coming up for air when their lung capacity expires. Although the gear only comprises a single air tank, the player is able to stay underwater indefinitely when it is equipped. This can be used for searching the depths and looking for objects such as the treasure in shipwrecks and underwater collectibles, such as Submarine Pieces and Peyote Plants. The player's lung capacity will increase while using the scuba gear underwater at the same rate as if the player was holding their breath without the gear.

Note that the Scuba Suit is only effective to the same depth as the submersible (just under 500 feet) and will not prevent crush injury and death from deep water pressure if the wearer is too far down.

Although there is a dedicated scuba suit, it is not given along with the scuba gear, meaning the player must wear it manually. Alternatively, the Scuba Gear will be worn over top of whatever clothing the protagonist is currently wearing.

Scuba suits are available for purchase at clothing stores and Ammu-Nation in the Outfits sections. Saving a suit as a custom outfit easily allows the player to put it on quickly to prepare for a dive. The gear itself will only appear while the player is in open water or in deep swimming pools. 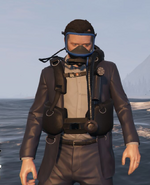 The Prolaps wetsuit, also known as the Scuba Land outfit, including flippers and hood. (Rear view)

Discarded gear next to a beached Dinghy.

Scuba Diving near a Submersible.