The Scrap Truck's design is derived from the Yankee from Grand Theft Auto IV, using an identical cabin design, flat bumper and front lights. However, it uses a different grille design, a flat hood, visible door hinges, fuel tanks with side steps below the cabin, marker lights and trumpet horns on the roof, no circular mirrors on the sides and small box-shaped tanks behind the cabin. The rear section uses a large bed with square tail lights on the outer sides, a black bumper on the lower side and small mudguards below. The same bed has wooden barriers around it, with an open section on the passenger side.

The truck always spawns with a rusty appearance and may spawn either with an empty bed of with three different assorted appliances, which may have a few missing wooden barriers. It uses a fewer variety of single colors for the cabin and the bed, and uses industrial wheels seen in vehicles like the Phantom and the Mule.

Scrap Trucks are operated by Rogers Salvage and Scrap.

The Scrap Truck's performance is average considering its weight, size and purpose. The truck is capable of reaching great top speeds, but due to its weight, it is sluggish and unresponsive when accelerated. Its long wheelbase and chassis results in it having a large turning radius, but thanks to its weight, it is very stable when cornering and maneuvering at high speeds. Additionally, it can easily ram smaller cars off the road, and its durability is remarkable. Overall, it performs similarly to its Towtruck equivalent, but has lower top speed and acceleration.

The vehicle is powered by a large twin-cam 4-cylinder engine that is fitted with a large turbocharger to the left of the engine bay, which is laid longitudinally, in a front engine, rear wheel drive configuration and coupled to a 5-speed gearbox. Unlike its Towtruck equivalent and most light trucks, the Scrap Truck uses the same engine sound as heavy trucks such as the Phantom, the Rubble and the Pounder, being somewhat similar to a diesel engine that revs moderately high and provides a significantly smooth sound, yet the roar produced from the engine can still be heard unlike the one used on light trucks and the Towtruck. 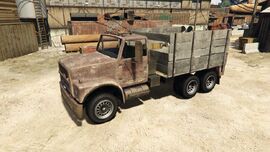 The Scrap Truck on the updated Rockstar Games Social Club. 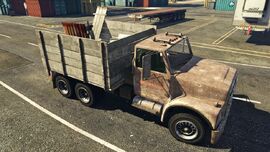 The Scrap truck in the cinematic preview on Rockstar Games Social Club.