Standard White - 100%
“The Declasse Scramjet is final proof that the greatest inventions are accidents. No one thought we had any need to jolt a hyper-stylized retro speedster thirty feet into the air and turbo boost it into the side of the nearest high-rise. But once it happened, and we saw the kind of potential it unleashed, there was no going back. This one's for the dreamers.”
— Warstock Cache & Carry description.

The Scramjet takes cues from the popular 1960s Anime series Speed Racer and the lead car, the Mach Five. The front and rear fenders resemble those found on the Alfa Romeo 33/2 Coupé Speciale.

The Scramjet is distinguished by its rounded and sleek profile, featuring a trident-like front end with small intakes on each side of the central nose. On the outer edges, large circular lamps can be seen housed behind glass casings, bearing plastic fittings around them. The hood area is relatively curved and has bulky formations on the edges that define the fender areas, while additional lines are seen continuing from the central nose and leading towards where the fender formations end.

On the sides, the vehicle has triangular formations near the wheels and a narrower shape in the middle with the corresponding seams for the access doors, as well as triangle-shaped mesh intakes on the rear section. The cabin area is always depicted with an open top, featuring a curved windshield seemingly aligned with the door windows, and two elevated formations with sharp fins seen directly behind the seats.

The rear end has a concave profile with a similar pattern to the front end, where the outer portions house the rectangle-shaped tail lights and the outer edges house black circular exhausts, which double as rocket boosters.

The interior of the car is mostly unique, featuring a set of "Dominator" dials arranged in a way where the speedometer and tachometer are placed on a driver-side console, and smaller display gauges in the center of the dash and below the radio set. The top side of the same dashboard features a rectangular mirror in the center, and the steering wheel bears the manufacturer emblem in the center. It uses large seats with safety belts.

The vehicle only has access to a single primary color applied to the bodywork and the stitching around the steering wheel. It also uses a set of wheels that are identical to the "Drag SPL" muscle wheels available in Los Santos Customs and Beeker's Garage, which can also support a dedicated color (although only examples generated in the Content Creator may have one). The front wheels are also narrower than the rear ones.

The vehicle is armed with a set of machine guns and missile launchers, which are located on the front intakes.

The Scramjet's aerodynamic design allows for good acceleration and top speed, as well as decent handling and braking. Its suspension is low due to its wheels having negative camber, often struggling to sort small barriers, but it is slightly compensated by the front end having a sloped profile, sorting out curbs and small bumps normally.

The Scramjet has 5 Advanced Flags activated[2], including the 4 flags introduced in the Southern San Andreas Super Sport Series update, with only the first three having known purposes. They are as follows:

The Scramjet is powered by a front engine, coupled to a 6-speed gearbox and powering the rear wheels. Its engine sound is similar to that of the XA-21.

Both abilities can be used simultaneously, making the Scramjet a great vehicle for shortcuts and evading most enemies. However, it requires practice, as the car tends to lean forward when using the booster mid-air. This also requires awareness of the environment, as the car may accidentally end up getting stuck or even sinking on water.

The driver has access to their weapons for drive-bys, being useful against targets that are away of the vehicle's front or in situations where lighter weaponry is vital (i.e. retrieving a target vehicle).

The Scramjet can only be modified at a vehicle workshop, which is located either inside an upgraded Mobile Operations Center, in an upgraded Avenger, or at the Arena Workshop (if the player has purchased the Weapons Expert mechanic).

When purchased, the Scramjet comes painted in the following colors by default: 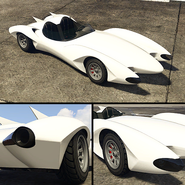 The Scramjet on the updated Rockstar Games Social Club.

The Scramjet in a Cinematic preview on Rockstar Games Social Club. 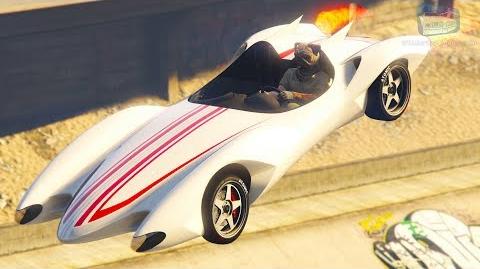