GTA Wiki
Register
Don't have an account?
Sign In
Advertisement
in: Vehicles, Vehicles in GTA V, Bikes,
and 4 more
English

Yes
“San Andreas is full of some epic places to take this off-road beast. Comes with a mud flap so your back doesn't look like you've had a train run on you by lumberjacks. High torque cranks sound really impressive if you know what it means, and also ensure it's nimble on a trail but also stable high speed, when you are on the cusp of losing control and flying over the handlebars.”
— Pedal and Metal Cycles website.

The Scorcher is designed as a high-performance offroad bicycle, fitted with front shocks, disc brakes, and a sturdy frame. It resembles the real-life Saracen Zen but with a slacker head-angle of around 65° and a slightly beefier head tube junction. The forks look very similar to real-life Rockshox Domain 180mm with its nickel-plated steel stanchions, albeit with a squared-off bridge similar to that of the Marzocchi 66 and the Fox 36 Float 180. The hydraulic disk brakes are similar to the real life Shimano XTR with their four-spoked disk rotors and the tyres possess a tread pattern and volume similar to the 2.7 inch version of the Maxxis High Roller. The drivetrain is likely a 2x1 setup, as seen by the drivetrain visible in-game. This is strange for a competitive mountain bike, as race bikes often posses around 8 to 12 rear cogs and one front chainring. In addition, the bike has no shifting paddles on its handlebars, and only features brake levers. This means that the smaller front chainring and the derailleur are completely useless, as there would be no other way to change gears other than manually lifting and placing the chain into place by hand. This is likely a development oversight.

The Scorcher has great speed compared to standard bikes, only below the three race bikes. Its rugged tires provide great handling on dirt roads and better grip, allowing to climb near-vertical hills faster than other bikes.

Like the BMX, the Scorcher can also perform bunny hops and wheelies, but seems to be less effective than the former due to its weight, being the second heaviest bicycle in the game, only lighter than the Cruiser.

Side view of a Scorcher. 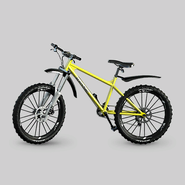 The Scorcher on Pedal and Metal Cycles.

The Scorcher on the updated Rockstar Games Social Club.

The Scorcher in the cinematic preview on GTA Online Rockstar Games Social Club.

The Scorcher in the cinematic preview on GTA V Rockstar Games Social Club.