Scooter Shooter is a side mission in Grand Theft Auto: Liberty City Stories. To start this mission, the player must hop on the Faggio in an alleyway in Chinatown, Portland Island, next to the building where Massimo Torini meets a number of Triads in the mission Calm Before the Storm. The player does not have to complete this mission unless 100% completion is the player's goal.

This mission involves the player attacking and killing Colombian Cartel gangsters driving in vehicles marked with a red dot on the map. Some of the targets are armed with a gunman behind the car, who tries to damage the Faggio.

This mission is much like 9mm Mayhem; the player will have to dispose of targets with a supply of three adrenaline pills. This time, though, the player is equipped with a TEC 9. There is a time limit of three minutes, and Mrs. Menalot driving the Faggio. Also, a damage meter shows up on the screen; if it's filled up, the player will fail the mission. Also, instead of dying, the player would just respawn back to the starting point.

Each kill gives the player money based on the following formula:

. The first kill nets $5, and subsequent kills are worth more. 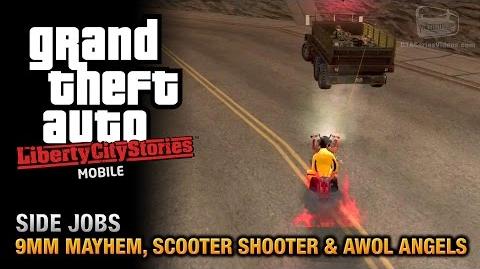