supercar_9_eur_v8
“Say what you will about the Germans - they know luxury. And their economy is the only one worth a crap in Europe. This model has all kinds of extras - too many to list for legal reasons.”
— Southern San Andreas Super Autos description.

The Schwartzer features very aggressive formations which appear to have been inspired by German design styling featured on the Mercedes-Benz E550 Coupé for the compact wheelbase, while the headlights and grille are mostly inspired from the flagship C216 CL-Class. The tail lights, however, are taken from the Mercedes-Benz E550 Sedan. Meanwhile, the side windows are styled off of a Mercedes-Benz C63 Coupé. It becomes very obvious that the vehicle is the coupe version of the Schafter, due to the fact that the C207 is the coupe variant of the W212 (which the Schafter is based on). The car also bears a subtle resemblance to a C209 Mercedes-Benz CLK-Class, the predecessor of the C207 E-Class.

At the base of the front bumper sporting influence is very prevalent. The front bumper features a main central vent whose base appears to have a CFRP insert. Either side of this vent there are two, less tall vents, whose inner edges are parallel to the outer edges of the central vent. Above the central vent there is a large main grille with chrome edges and a horizontal chrome strip splitting it into two halves. The headlamp units have curved lower edges which almost continue the curvature of the bottom edge of the grille. The bonnet/hood has a main elevated area, whose edges run from a top corner of the main grille to their corresponding windscreen corner.

On the sides, vertical thin vents occupy the area of the front fenders between the wheel arches and the doors. What appears to be CFRP strips can be seen on the skirt area. The car features rear view mirrors whose outer shells are finished in carbon-fibre, while the trimmings surrounding the windows of the car are finished in black.

The rear of the car draws the same design elements from the Schafter, being the boot/trunk lip and the rear lights. However, the bumper sports a concave design and the square-shaped exhausts are larger in appearance. The central portion where the exhausts and the vent are located is also finished in carbon-fibre.

The car may spawn in a variety of single colours for the body and the stitching. It also uses a unique set of wheels, consisting of nine thin spokes with concave centers, wrapped in low-profile tyres.

Compared to its four-door equivalent, the Schafter, it has overall better performance. It is more agile and much quicker. The exhaust note sounds more powerful as well. The steering is quick but it also feels artificial with little to no connection to the road. It has better acceleration than the Sentinel XS. The Schwartzer is also capable of performing drifts around sharp corners without the risk of a spinout if at the hands of an exceptionally skilled driver. 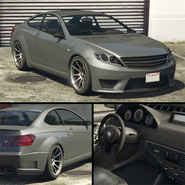 The Schwartzer on the updated Rockstar Games Social Club.

The Schwartzer in the cinematic preview on GTA V Rockstar Games Social Club.

The Schwartzer in the cinematic preview on GTA Online Rockstar Games Social Club.