The hospital is one of the two main hospitals in Vice City Mainland, the other being West Haven Community Healthcare Centre, in the southern part of the area.

When the player gets wasted, the player will respawn at this hospital if this hospital is the closest one to the player. An Ambulance and a health pickup is usually found here. It is one of the few places which has a known address: 1212 Hoarmont Ave.

In Grand Theft Auto: Vice City, a unique stunt jump is located on the roof of this hospital.

In Grand Theft Auto: Vice City Stories, there is an elevator which leads to the rooftop. The elevator can be entered by walking into the blue marker. After completing From Zero to Hero, an Air Ambulance will spawn on the helipad at the rooftop. 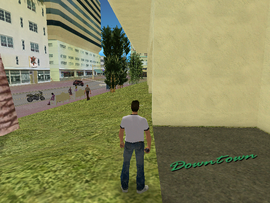 Location of the glitched wall
Add a photo to this gallery

Retrieved from "https://gta.fandom.com/wiki/Schuman_Health_Care_Center?oldid=1184866"
Community content is available under CC-BY-SA unless otherwise noted.