The School Bus was a vehicle due to appear in Grand Theft Auto III.

It can be assumed that the early GTA III Bus was originally to assume the appearance of a school bus, in the same vein as the Bus in Grand Theft Auto (in Liberty City and Vice City), given its design similarity which conforms with the early pre-release screenshot featuring the school bus. Since its re-design, buses resembling the typical "yellow school bus" have appeared in the form of wrecks in almost every Grand Theft Auto title.

Revelation of the bus's existence surfaced during development of GTA III, when early pre-release screenshots depict what were thought to be 1980s conventional cab school buses common in the United States. The bus comes complete with a light-adorned rear, as well as the yellow body color that distinguishes it as a school bus. In addition, the bus features only one frontal entrance on the passenger side of the bus, unlike the GTA III rendition of the Bus (which features doors on both sides).

The concept of featuring a school bus was dropped during development without a formal explanation. It was originally speculated, but denied by Rockstar Games, that the removal was an attempt to avoid controversy over killing children or representations of children in the game. However, the final design of the Bus does derive its frontal design from the school bus, but features a re-designed side profile and a curved tail end.

The school bus also survives in the final version of GTA III in the form of wrecks found in the 8-Ball Autos compound and Harwood Autocrusher and Junkyard in Harwood, Portland, lacking wheels, doors and windows. This model continued to be used in successive games, including Grand Theft Auto: Vice City (inside the Hyman Memorial Stadium during "Dirtring", and in Little Haiti and Little Havana), Grand Theft Auto: San Andreas (in Blackfield Stadium during the "Kickstart") and Grand Theft Auto: Liberty City Stories (the same locations as in GTA III).

School bus wrecks continue to appear in GTA IV, this time in the form of two versions, one with its four wheels intact and the other without wheels and with a slightly crushed body; both versions have been extensively stripped, leaving little but their skeletal frames. The buses closely resemble the (mid-1989–2004) international 3800 school bus. The front resembles that of the Securicar, implying that these might be made by Brute.

Unlike other wrecks in the game, school bus wrecks are far fewer in number, appearing in at least two locations, including Firefly Island (close to the Screamer roller coaster), and Northwood (in the northwestern scrapyard). Traffic law signs throughout the city can also be found, instructing vehicles to stop for school buses.

The School Bus returns in GTA V, this time as an abandoned mobile home in Stab City, that is being used as a large dumpster for various pieces of trash and junk, including a wrecked sail boat. The School Bus also gets mentioned by Agent 14 during the heist setup mission Prison Break - Bus.

School bus (left) in the alpha version of GTA III.

A couple of junked school buses in the Blackfield Stadium during the Kickstart trial in GTA San Andreas. 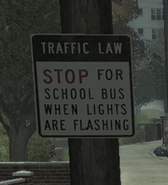 A sign near Mikhail Faustin's Mansion in GTA IV.