Standard White - 100%
“Looking at the low, broad, surly form of the Schlagen for the first time, you'd be forgiven for thinking that it's just waiting for an opportunity to knock you out, steal your keys and organize a gang bang with the Pfisters in your high-end garage. Of course, appearances can be deceptive. Not in this case, admittedly, but it's a good rule of thumb.”

The Benefactor Schlagen GT is a sports car featured in Grand Theft Auto Online as part of the continuation of the Arena War update, released on January 22, 2019, during the Schlagen GT Week event.

The Schlagen GT is heavily based on the Mercedes-AMG GT, with side profiling, headlights and the front bumper lip of a BMW Z4. The tail lights seem to be inspired by the ones from BMW 8 Series Concept.

The Schlagen GT is depicted with a profile and layout similar to the Surano, but with a sportier, aggressive look. The front bumper features a set of meshed air intakes, the central one defined by a black, plastic-like insert and having a trapezium shape, while the outer ones are smaller and are defined by lower painted inserts. The upper area is largely dominated by the grille, which bears two horizontal elements and a large Benefactor emblem on the centre, while the portions beside it house modern headlamps and LED-like strips, with the upper ones being the high-beam units. The bonnet area is relatively simple and bears a smaller Benefactor emblem on the centre, just in front of the engine compartment. The same compartment opens to reveal a black cover plate with the Benefactor emblem on the centre, emulating the engine bay from the real-life Mercedes-AMG GT.

The sides of the car follow a similar profile to that of the Surano, where the front fenders have large exit vents between the wheels and the doors and inset portions passing through the doors, whose upper lines start from the front wheel arches and angle upwards to where the door ends, passing through the handles. The skirting area slightly protrudes from the rest of the car, bearing black aero strips over these. On the glasshouse area, the car has black B-pillars separating the rear-quarter windows from the door windows, while the doors have rounded mirror shells with CFRP support frames near the A-pillars. Directly behind the cabin, there is a large hatch with the glass on top and a sectioned panel with a small lip spoiler.

The rear of the car consist of a sectioned panel that is part of the rear hatch, having the Benefactor emblem embossed on the centre. The areas beside the rear panel are occupied by black tail lamp housings, consisting of small strips and large red units on the outer edge of the housing. The lower area consist of a central inset section for the license plate and vertical exit vents on the outer edges, while the bottom houses a black section with large exit vents and circular exhaust tubes on the centre.

The interior is the same one seen in cars like the Specter, the Specter Custom and the Dominator GTX, with the corresponding Benefactor emblem on the horn cap.

The car can be painted with a primary colour for the bodywork and a secondary colour for the mirrors and the interior stitching. A trim colour is also available for the interior, being applied on the dashboard, the doors and the seats. It shares the same rim design as the Dominator GTX, being similar to the "Synthetic Z" sport wheels also available in Los Santos Customs, although the outer area behind the spokes are slightly larger. These rims can also support a dedicated colour, although only naturally-generated examples from Content Creator, or the one appearing in the Casino Work mission Recovery Time, may have one.

Upon its release, the Schlagen GT was the only vehicle since the San Andreas Super Sport Series update to not present any advanced handling flags. As a result, the handling is very stable and because of its V8 engine, it can prove to be a competitor against other sports cars such as the Elegy RH8, Elegy Retro Custom and the Jester. The car can suffer from oversteer if given too much gas on dirt/wet roads while going through a corner due to its high power output focused on the rear wheels.

Although the engine is mostly covered by a black plate and has no indication of its exact configuration, it seems to emulate the twin-turbo V8 from the real-life Mercedez-AMG GT, and is coupled to a 7-speed gearbox in an FR layout. Its engine sound is a higher-pitched variation of the Schafter V12 engine sound. 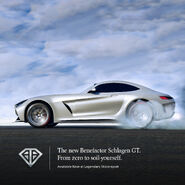 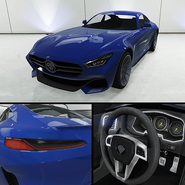 The Schlagen GT on Legendary Motorsport.

The Schlagen GT on the updated Rockstar Games Social Club. 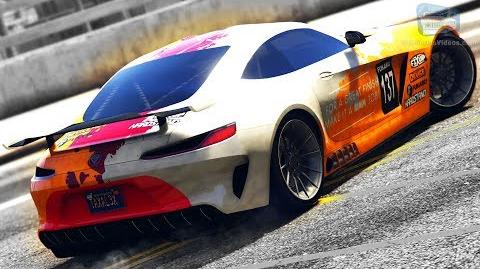