Standard White - 100%
“A stable, well-adjusted sedan. Coincidentally, those are two traits that help any executive get to the top of any city - except Los Santos.”
— Career Builder description.
“Powerful, understated, reliable. You have absolutely none of these qualities, so it's important to you that your car does. The new Benefactor Schafter screams corporate anonymity just as much as its predecessor, so to justify the massive price hike we've thrown in a few flourishes and a plush interior where you can screw your secretary's secretary in comfort. Armored edition available.”
— Legendary Motorsport description.

The Benefactor Schafter V12 is a luxury four-door sedan featured in Grand Theft Auto Online as part of the Executives and Other Criminals update.

Colour distribution is the same as the regular Schafter, where the primary colour is applied to the body and the interior stitching, while the secondary colour is applied on the bonnet, roof and boot. A trim colour is also available for the interior, being applied to the dashboard, seats and door panels. Its wheels share the same rim design as the "Diamond Cut" sport rims available in Los Santos Customs, wrapped in low-profile tyres.

The Schafter V12 is dramatically different than the normal counterpart, as it sports an upgraded version of the original apparent V12 (sounding higher-revving and louder likely due to big-bored exhaust manifolds and tuned camshafts/valve timing, despite its cover and model remaining identical). This provides more power to its rear wheels, offering better acceleration and subsequently a higher top speed. Traction has also been improved and braking times reduced slightly.

Its outright performance is much higher than its simple appearance implies, with acceleration being mostly comparable to the Zentorno and a top speed which rivals the Adder. Handling is a bit of a mixed bag: it has a very tight cornering radius and strong response time (true to its Sedan origins), but the extremely powerful engine makes it prone to oversteer and lose control. Keeping it under control is no easy feat in the corners, as the torque put out by the engine is significantly more than the car can handle.

While its acceleration power may be subpar compared to newer 4-door sports cars, its top end power remains formidable thanks to its low drag coefficient. 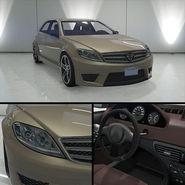 The Schafter V12 on Legendary Motorsport.

The Schafter V12 on the updated Rockstar Games Social Club. 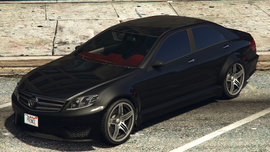