No
“Powerful, understated, reliable. You have absolutely none of these qualities, so it's important to you that your car does. The new Benefactor Schafter screams corporate anonymity just as much as its predecessor, so to justify the massive price hike we've thrown in a few flourishes and a plush interior where you can screw your secretary's secretary in comfort. This model has an extended wheelbase. Armored edition available.”
— Legendary Motorsport description.

The Benefactor Schafter LWB (Armored) is a luxury armored four-door sedan featured in Grand Theft Auto Online as part of the Executives and Other Criminals update.

The vehicle is essentially the armored variant of the Schafter LWB, which features armor padding on the sides and window armoring on the pillars.

Colour distribution is the same as the regular Schafter LWB and the Schafter, where the primary colour is applied to the body and the interior stitching, while the secondary colour is applied on the bonnet, roof and boot. A trim colour is also available for the interior, being applied to the dashboard, seats and door panels. Its wheels share the same rim design as the "Drag SPL" muscle rims available in Los Santos Customs, wrapped in high-profile tyres.

The Armored Schafter LWB is the slowest of the Schafters available in GTA Online, having the slowest acceleration and a very limited top speed compared to the other Schafters available. Despite the aggressive engine sound (which seems to be similar in tone to the Gauntlet and Sabre Turbo), which makes it sound very high powered, the car still lacks the force to accelerate quickly. This lack of power is seen prominently in off-roading conditions, even on basic straights, such as south of Fort Zancudo at the Lago Zancudo stretch, where the car is limited significantly in terms of speed.

In terms of handling, it is slightly inferior to the standard Schafter LWB. Because of the long wheel base, the car suffers in cornering and response times are much bigger than the other Schafters. Its turning radius is notably small when compared to the V12, and the standard LWB has a slightly bigger cornering radius.

The car's most important feature, however, is the armored plating. It is comparable to the Cognoscenti 55's Armored counterpart, as the armored padding on the door panels defends all players from bullets hitting the doors, and at least 1 Rocket Launcher shot can be deflected. After one rocket, the vehicle begins to lack startup power and acceleration, where the engine is heavily damaged. The windows are not completely bulletproof, but the armored trims around the windows makes the chances of bullets going through the windows lower, protecting the players inside. More armor is found around the front and rear windows too, where they are also slightly stronger compared to the stock counterpart's windows.

The Schafter LWB (Armored) can take the following:

It can be noted that the Schafter LWB shares its armored capabilities with the Schafter V12 (Armored), XLS (Armored), along with both armored Cognoscentis and Baller LEs. 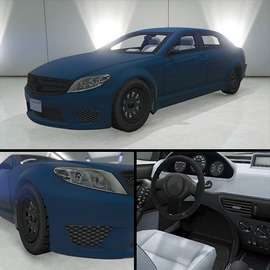 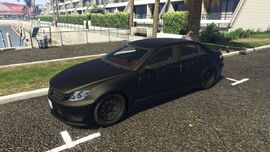 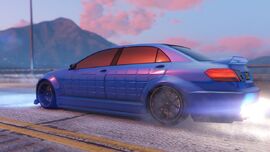 The Schafter LWB (Armored) in the cinematic preview on Rockstar Games Social Club.