GTA Wiki
Register
Don't have an account?
Sign In
Advertisement
in: Vehicles, Vehicles in GTA IV, Vehicles in The Ballad of Gay Tony,
and 7 more
English

The Schafter is in a lot of ways similar in design to a Mercedes-Benz E-Class (W211), but was altered to appear with a longer wheelbase, bulkier body (in this case, it would be a S-Class (W220) in particular) and less luxurious fascias. Its rear fascia seems to be derived from a Mercedes-Benz CL-Class (C215), most likely the AMG variant. The front also bear resemblance to the Ssangyong Chairman H (which is based on a Mercedes-Benz platform) with the headlights from the Maybach 57 and Maybach 62.

The Schafter features a distinctive design, where the front end is predominated by a bulky bumper with a set of intakes on the centre and on the edges. The upper area is occupied by silver/chrome housings with circular lamps and small lights on the edges, as well as a grille with seven horizontal bars. Said grille is also part of the bonnet.

The sides of the car are relatively simple in appearance, with flared wheel arches and wide skirting area. The window trim and inner pillars are finished in black, as well as black rear-view mirror shells.

The rear of the car is rather generic, featuring a basic boot holding the license plate and the silver badging. A set of tail lamps can be seen on the outer edges, with the reverse lamps placed within silver strips. The lower area is occupied by a flat bumper with a lip at the bottom, as well as mouldings for the square-shaped exhaust tubes.

The Schafter can spawn in a large variety of primary colours for the body, while the rims and door handles assign a white secondary colour, with the exception of two colour sets with black secondary colour. It uses plain steel rims with five small gaps around the centre.

The Schafter is equipped with a GPS system with a female voice, but only if the player leaves the "selected cars" (default) option in the audio menu.

Featured in The Ballad of Gay Tony, there is a newer iteration of the Schafter, with a general design based on a Mercedes-Benz E-Class, while the front heavily resembles the Mercedes-Benz CL-Class C216.

The vehicle has a modernised appearance, featuring a larger grille and LED strips below the two bi-xenon bulbs in the headlights, as well as unusable fog lamps. The cabin area lacks the extra black pillars on the rear windows, while the rear section has a more aerodynamic profile, featuring a boot lip, larger tail lamps and slanted upper area. The vehicle is only available in a modified form, featuring a different grille, a body kit and dual exhaust.

The Schafter may spawn in monotone and two-tone colours, the the secondary one is applied on the bonnet, roof and boot. It uses a set of larger chrome wheels.

Unlike the first generation model, the GPS option is not available by default. Should the player leaves the "yes" option on the audio menu, the GPS system still uses the female voice.

In Grand Theft Auto V and Grand Theft Auto Online, only the Second Generation model returned to the game, with the same design as in TBoGT, but lacking any bodywork modifications (instead being only available at Los Santos Customs).

Colour distribution is the same, although the interior stitching matches with the primary colour. It retains the same wheel design, being similar to the "Benefactor" SUV rims available in Los Santos Customs.

The Schafter is powered by an apparent 6.5L supercharged V12 (according to badges) coupled to a 5-speed automatic gearbox in a RWD configuration. Although the large 6.5L supercharged V12 is quite powerful, the car feels slow because of its weight. Due to said weight, acceleration is below average, compared to other vehicles in its class, such as the Oracle and Presidente. Top speed is very good for the vehicle's engine statistics and specifications. The car handling is above average, although a slight hint of oversteer is detectable, the Schafter's firm suspension makes it a pleasure in low-speed cornering. Both generations of the Schafter bear an impressive degree of torque, being able to push or ram other vehicles with ease. The suspension is a perfect balance of firm and soft, keeping the Schafter planted on the road in turns, while not jarring over bumps. Braking is fair, and ABS is available, though not standard. Crash deformation and engine build quality are excellent; the car is capable of sustaining multiple direct impacts, and can also take a fair amount of gunfire before the engine stalls or inflames. The "Russian Mafia" Schafter has a slightly higher top speed than its unmodified counterpart.

Both the first and second generation performs the same.

The Schafter is powered by the same V12 engine (according to the badges), but shares a similar engine sound with the Tailgater, Sentinel and Sentinel XS, Gresley and Surano, all of which have lower power-sounding engines. The Schafter is considered as among the fastest Sedan-class vehicles, with a higher top speed than any other (except the Super Diamond) and excellent acceleration. Unlike other cars such as the Tailgater, it does not have as much of a tendency to oversteer because of excessive traction, hence retaining much of its speed in the corners, therefore making the Schafter an ideal, if not the ideal, car to use in Sedan-class races in Grand Theft Auto Online (namely in the X360/PS3 versions of the game), as well as a good choice as a getaway vehicle for The Big Score. Crash deformation across all variants is acceptable. 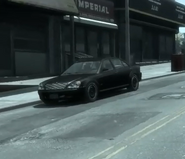 The black Schafter found at Perestroika Club in The Master and the Molotov. 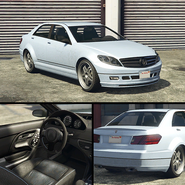 The Schafter on the updated Rockstar Games Social Club. 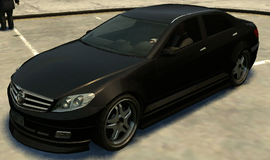 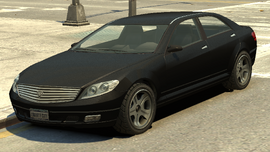