Vic: "I've got a business to run. I've got to make some money."
Reni: "Darling, wait. If it's money you need, then maybe you can breathe some life into this bloody fucking mess of a scene! Somebody burn this script! Let's make art!"
― Reni Wassulmaier hires Victor Vance for another stunt job

Victor has been messaged by Reni and informed that she has some more work for him. When arriving at the InterGlobal Films' course, Reni is seen making a film. After a long on-going talk between them, Reni tells Victor that there's a commercial and they need a stuntman. Victor gets on a Jetski and goes through all the checkpoints while being filmed by an Armadillo following him from above. After a while, Victor eventually reaches the shore in Ocean Beach and hops on a PCJ-600 bike with special handling. After going through all the checkpoints, he is rewarded and a bit of Köck cheese is shown outside the door of a house.

The cash reward for completing the mission is $850, plus the mission Kill Phil: Part 2 is unlocked once the mission Purple Haze is completed. In addition, an optional series of side missions called Watersports is unlocked.

Vic riding the Jetski through the course. 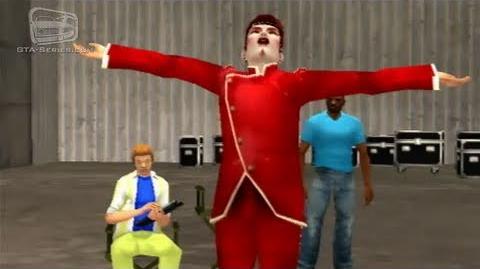