Standard White - 100%
“Back in the 70s, the Savestra was the car your parents banned from the house after it pissed engine oil on the carpet and dry-humped your dad's Schafter. Taking all the power and presence of a big American sports car and boiling them down to a concentrated dose of rage, this little pit bull is the perfect candidate for a whole suite of brutal mod options, including a light machine gun or two.
Please note: Weapon modifications can only be applied at a Vehicle Workshop inside an Avenger or Mobile Operations Center.
”

The Annis Savestra is a 2-door sports car featured in Grand Theft Auto Online as part of the The Doomsday Heist update, released on January 2nd, 2018, during the Savestra Week event.

The Savestra is a compact 2-door coupe heavily based on the Series II-III Mazda Savanna/RX3 with influences from other mid-1970's Japanese coupes including the Nissan Skyline C110, as seen on the front grille of the car, 1972-1974 Mitsubishi Galant GTO (specifically the GS-R) which the rear is based on and the 1970-1974 Toyota Corolla Coupe (Levin & Tureno) which the middle section is based on. The taillights are based on the 1973 Toyota Celica liftback 2000 GT.

The Savestra is distinguished by its compact body, where the lower area of the front end features a small intake on the centre and two rectangular amber signals on either side, just below a chrome bumper. The upper area is predominated by a plastic panel housing a rectangular grille with the manufacturer emblem on the centre and dual circular headlamps on the outer sides, with the inner ones working as high-beam lamps. The bonnet area is mostly traditional in appearance and has two small vents near the windscreen, which hinges from the front and opens forward to reveal the engine bay.

On the sides, the vehicle features bolt-on extended arches, as well as two rear-view mirror shells beside the bonnet compartment. The cabin area makes use of chrome trims around the windows and separations between the door windows and the rear-quarter windows.

The rear of the car features a simple boot with silver badges on the rear end, displaying the car's name and manufacturer. Just like the front end, the rear end makes use of a chrome bumper and a plastic panel, the latter housing the rectangular tail lamps and holding the number plate. An exhaust muffler with dual exit tips can be seen on the driver side.

The interior uses dials and components from Race-based interiors, but the layout is rather unique, with the speedometer and tachometer centralized on the driver side and the small gauges on the central console (two gauges below the radio set and three gauges above it). Two circular aircon units can be seen on either side of the dashboard, along with a passenger glove compartment. The car is also fitted with two sports seats with red safety belts.

The primary colour of the car is applied on the bodywork and the interior stitching, while the secondary colour is applied on the mirror shells amd the inner trim around the front intake. Its rims appear to be a variation of the "Fujiwara" tuner rims seen in Los Santos Customs, although smaller in diameter and having four bolt details around the centre. These rims can also support a dedicated colour, although only examples generated in Content Creator may have one. 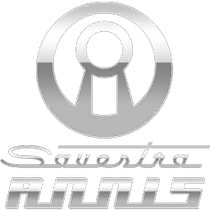 The Savestra has good acceleration and top speed, but where it really stands out is traction. Despite the high torque delivered to the rear wheels, the high traction keeps the wheels glued to the road, making the car great for track races with lots of tight turns. However, this grip makes it hard to drift or powerslide with the vehicle. It also has an annoying tendency to downshift if a drift is not initiated properly, although the short gear ratio helps it recover quickly.

Like the Futo, the vehicle is powered by an Inline-4 engine bearing four throttle bodies. Unlike most vehicles with similar engine, the throttle bodies are facing towards the engine rather than to the outer side of the vehicle. With the "Exposed Turbos" modification, two turbochargers are added to the vehicle, although they have no performance effect unless the actual "Turbo" modification is installed. The engine sound is very unique, being a louder, higher-revving variation of those from cars like the Elegy Retro Custom, with additional effects that somewhat resemble real-life rotary engines.

Machine Guns: The vehicle can be equipped with two front-facing machine guns operated by the driver, which perform the same as those of vehicles like the Blazer Aqua and the Ruiner 2000. They have decent firepower against players and vehicles with none or light armor, but will struggle against heavily-armored vehicles.

The Savestra can be modified at Los Santos Customs, although the weapons can only be accessed by a Vehicle Workshop inside a Mobile Operations Center or Avenger. 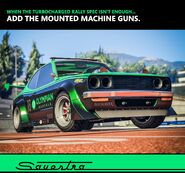 Promotional poster of the Savestra. 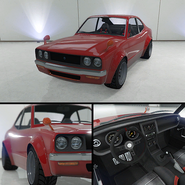 The Savestra on Legendary Motorsport.

The Savestra on the updated Rockstar Games Social Club.

The Savestra in the cinematic preview on Rockstar Games Social Club. 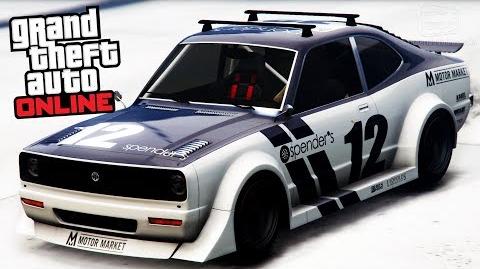