"I thought you was a 'squatch... nearly put a bullet in you."
―Hunter to Franklin

The Sasquatch Hunter is a random character in Grand Theft Auto V.

The Sasquatch Hunter is an unnamed character that Franklin Clinton encounters in Raton Canyon in the Chiliad Mountain State Wilderness trying to hunt a Sasquatch. After a conversation, he convinces Franklin to help him. He claims to have been on a Sasquatch's tail for eight years.

He has a false left eye and scar which may imply that he was injured by a wild animal.

After Franklin locates the "Sasquatch", the hunter is never seen again.

During the hidden Golden Peyote Plants trail in the hunt for the Beast, the player will be able to observe what appears to be the hunter's corpse during a Sasquatch hallucination. 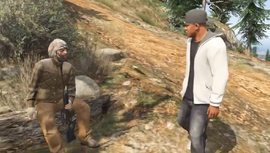 Retrieved from "https://gta.fandom.com/wiki/Sasquatch_Hunter?oldid=1227738"
Community content is available under CC-BY-SA unless otherwise noted.