The Sandy Shores Fire Station is a fire station operated by the Los Santos County Fire Department located in the small desert town of Sandy Shores.

It is located on Alhambra Drive, not far from the Sandy Shores Medical Center. The general exterior appearance of the building, with boarded up windows, suggests that the station may be poorly funded and rarely used.

The absence of a fire truck, which would be expected at fire stations, further suggests that the Sandy Shores station may be considered of minor importance and in the process of being closed. However, fire fighters can be seen hanging around outside the station's side entrance, meaning that there is still some hope for the station.

The Sandy Shores Fire Station was designed to resemble the fire station in Desert Shores, California. The Desert Shores Fire Department is currently closed which would explain why fire trucks are absent at its in-game counterpart.

Front view of the fire station. 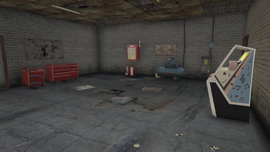 Retrieved from "https://gta.fandom.com/wiki/Sandy_Shores_Fire_Station?oldid=1093469"
Community content is available under CC-BY-SA unless otherwise noted.