For the 3D Universe predecessor, see Sandking.
“Boys love trucks, as do dogs, though we don't recommend you put your boy or dog in the back of this baby when ripping through pristine environments. Leave only tire tracks and empty beer cans to let them know you were there.”
— Southern San Andreas Super Autos description.

The design, overall, is strongly related to that of a third-generation Ford Super Duty, with some design cues from the first and second generations, such as the tail lights. The split headlights take cues from numerous generations of Chevrolet Silverado pickups. Unlike the Sadler, the Sandking XL does not feature the F-series signature "dip" along the beltline near the mirror.

As the name suggests, the Sandking XL is a full-size pickup with an extended XL wheelbase, which is also a lifted off-road variant of the Sadler. The truck comes with extremely knobby tire treads and impact struts, which begin suspended at the center of the truck and continues down to the wheels, with the suspension blue shock absorbers and its corresponding springs exposed.

The Sandking XL has a high amount of ground clearance. The modeled single cam V8 provides it with good power and torque, allowing it to get over obstacles easily, as well as most low-profile cars. While similar to its small brother, the Sandking SWB, its turning radius is less effective due to its larger wheelbase. Acceleration and gear-shift rate also denotes that is less effective than the SWB version.

The truck, however, has poor handling on the roads, offering fairly low levels of grip, due to the truck's heavy body. Off-road, the truck handles better, but the heavy weight of the truck and its long wheelbase contribute to its handling not being the best of the off-roaders, although suspension upgrades can make a noticeable difference. Like the Rebel and other off-road vehicles, however, its exposed tires make an easy target to be shot, unless it is fitted with bulletproof tires. A known glitch or design flaw in the game was that the truck did not feature full 4WD, so off-road traction on steep hills was limited. However, as of update 1.08, the truck now features fully functional 4WD, so it is now an extremely capable off-roader.

The engine sound is similar to the Landstalker's engine sound, however, it is of higher revs, and therefore sounds like a high-revving diesel engine.

A Sandking XL loaded with a Blazer Lifeguard. 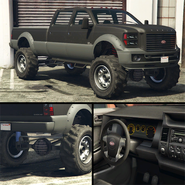 The Sandking XL on the Rockstar Games Social Club.

The Sandking XL on the updated Rockstar Games Social Club.

The Sandking XL in the cinematic preview on Rockstar Games Social Club.