Parked (All games)
For the two successors of the Sandking appearing in Grand Theft Auto V, see Sandking XL and Sandking SWB.

The Sandking is a high-performance, Rally raid truck. Similar to the Rancher, but the Sandking appears to be based on a 1985 Mitsubishi Pajero Rally Raid Car with customizations similar to a Bowler Wildcat.

In all of its appearances, the Sandking is depicted with myriad modifications commonly associated with off-road car racing. The Sandking boasts large off-road wheels, a large spoiler, and several air scoops on the hood and roof. It has the words "Sand Masters Cup" written on the side and rear, and racing liveries, similar to the decals available in Wheel Arch Angels. The space for the racing number, however, is blank. 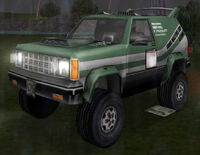 The Sandking seems to be mechanically related to the Rancher, and shares its off-road credibility. Its acceleration is above par and is an improvement on the rather quick Rancher. The suspension is stiffer than the Rancher, sacrificing some of the ride, but it still has enough travel to go over rocks and other obstructions without rolling over easily. It does have a high center of gravity, which makes it prone to tipping over at high speeds, however. Its handling is a big improvement over the Rancher, but the suspension is still pretty soft so it rolls and pitches respectively; but it's still very impressive for a vehicle at this size and height.

In Grand Theft Auto: San Andreas, it is sometimes available with hydraulics common in lowriders to further improve its off-roading capabilities. It fares well on road but it is not the best due to its soft suspension and height but is still competitive. Like the Rancher, it only seats two. The Vice City and Vice City Stories renditions have the same engine sound as the Cartel Cruiser, while the San Andreas rendition has the same sound as the Rancher. The Sandking is a great choice for picking up girlfriends, as it boosts the player's sex appeal to about a 75% level, only when undamaged.

This vehicle cannot be modded.

A screenshot of a Sandking in GTA Vice City Stories.