chopper_3
“The breakneck chopper of your dreams and everyone else’s nightmares. More than just a pretty face, this thing boats acceleration to die for. Almost certainly literally.”
— Career Builder description.
“OK, so it's not technically road legal. Or even vaguely safe. And with those forks you better get good at three point turns. But if you can get past all that you can cruise straight into your Goth biker death cult of choice.”
— Southern San Andreas Super Autos description.

The Liberty City Cycles Sanctus is a custom chopper featured in Grand Theft Auto Online as part of the Bikers update, released on October 28th, 2016, during the Vortex and Sanctus Week event.

The Sanctus is a heavily-customized variant of the Avarus, where it gains unique skull-themed parts that replaces some of the basic parts of various chopper-style motorcycles. The spiderweb-themed mudguards may have drawn inspiration from a Paul Teutul Jr. design, such as the Orange County Choppers Black Widow custom motorcycle.

On the front section, the front mudguard is replaced by a unique metallic piece resembling spider webs, while the upper area is fitted with a large skull-shaped fairing, housing two eye-shaped headlamps that emit a unique red glow, directly above the stem that connects the front forks with the rest of the motorcycle. The bike also replaces the single handlebars with two Z-shaped handlebars mounted where the top caps of the front forks are usually seen, with sharp tips on the end of each grip.

On the main body, the bike appears to use a frame similar to the "Sharp Tail Frame" modification from the Avarus, but has sharp sections on the front of the lower frame and a smaller one in front of the rear wheel, as well as triangular webs on the front tubular frame. The fuel tank is wrapped with a metallic piece resembling a rib-cage, with six "ribs" on each side of the tank, while the oil tank appears to be identical to the "Custom Oil Tank" and partially covered by two metallic webs. Again, a set of exhaust pipes can be seen on the right side, which are similar to the "Phantom Exhausts" (although the original Avarus' exhaust pipes can be found as the "Double Chop Exhausts").

The rear section retains the same set of tail lights and the vertically-mounted license plate, but the rear fender is replaced by another metallic web similar to the front one. Like other motorcycles featured in the same update, the Sanctus features a protruding primary drive with an Atomic-branded belt, as well as a chain drive, which are fully animated.

The primary color of the bike is applied on the body and frame, while the secondary color is applied on the custom components and the handlebars. The Sanctus' stock rims are identical to the "Razer" rims available in Los Santos Customs (which were added in the same update) and the outer surrounding can also support a dedicated color, which can be painted by selecting a custom rear wheel, applying a color and change back to the stock wheel (as it won't reset to the default alloy color). The bike also uses medium-profile tires, with the rear one being wider.

Much like the appearance would suggest, it can accelerate like a bat out of hell. In fact, the bike seems to have so much torque, even from a stand still, it can easily burn rubber, and the performance seems to also improve from the standard Avarus. The stopping distance and turning radius are slightly improved, making for a surprisingly well performing chopper.

Like the Avarus, the Sanctus uses a chain-driven, V-twin internal combustion engine with a 5-speed manual transmission, as evidenced by the foot-actuated gear shifter. Its engine sound is the same one as the Avarus, which is similar to the one used on the Hexer, the Daemon and the Hot Rod Blazer, albeit with a unique tone. The bike also emits a unique flame-like backfire effect, which has a slightly longer duration than the traditional one from most vehicles. 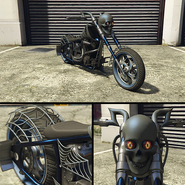 The Sanctus on the updated Rockstar Games Social Club.

The Sanctus in the cinematic preview on Rockstar Games Social Club. 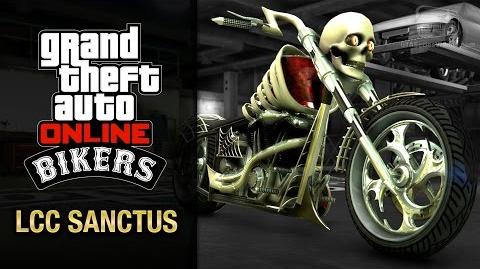