“Get her dirty. She loves it. Cover her with dirt. Take her to vile places she has never been before. Pop wheelies. Get crazy. Woof.”
— Southern San Andreas Super Autos description.

The vehicle is essentially a Sanchez with specific liveries not available in the standard model. The bike does not use a body color and instead it is determined by the livery's base color, accompanied by racing numbers on the front and rear sides. The vehicle retains the "Sanchez" decals, although the front one is always in a red color.

All liveries feature various sponsors, which are:

The Sanchez livery performs exactly the same as the regular Sanchez, bearing a high top speed and acceleration rate. Pulling wheelies also takes less effort, albeit with more risk of pulling a wheelie too quickly upon set-off, risking the player falling off. The Sanchez can climb near-vertical hills, although the more vertical the player goes, the slower the Sanchez will perform.

* Vehicle does not have access to the regular Respray options. The only available options are the ones listed here.
** Vehicle is limited to Bulletproof Tires and Tire Smokes. 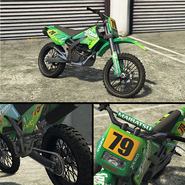 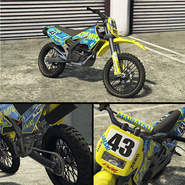 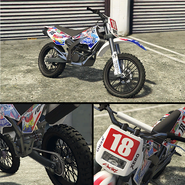 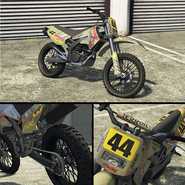 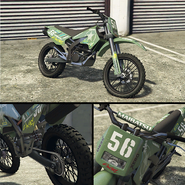 Trevor evading the LSPD in a Sanchez (livery).

The Sanchez (livery) on the updated Rockstar Games Social Club.