View source
watch 02:52
Roblox: DeepWoken - The Loop
Do you like this video?
Play Sound
For the Federal Investigation Bureau agent, see Andreas Sanchez.
Not to be confused with Manchez.

GTA IV & TLAD
TBOGT
GTA V
“Prepare to get even dirtier even faster with the all-new Sanchez. If you want a ride that really leaves a mark on the track, this is the bike for you.”

The Sanchez remains relatively unchanged in every game it appears in, having the same dirt-bike chassis design, off-road fittings and accessories, along with relatively similar performances. While not particularly fast compared to sport bikes such as the PCJ 600, the soft suspension, high ground clearance and very light weight makes it useful for stunt biking and offroad applications. They can be found on the streets of suburban or rural areas, and is also sometimes used in the Stadium(s) in Grand Theft Auto: Vice City and Grand Theft Auto: San Andreas, as part of side-missions.

In GTA San Andreas, as it may be based on a classic American dirtbike, the Sanchez, along with the Freeway, are the only American based motorcycles in the game.

In Grand Theft Auto: Vice City, Grand Theft Auto: Liberty City Stories and Grand Theft Auto: Vice City Stories, the Sanchez assumes the design of an older dirtbike model, possibly an early 80s Yamaha XT/Honda XL. It uses long telescopic forks, a long mudguard below the lower triple clamp and a round headlight, together with small handlebars with a reinforced frame on the center. The main body features a small protective body frame, a small fuel tank and a black seat, while the engine features a protruding exhaust pipe on the right side. The rear area features a long rear fender with small side covers, along with a red rectangular tail light on the end of the fender and the exhaust muffler below it. The rear wheel is supported by a dual-side swingarm, along with a visible chain drive and sprockets. All renditions spawn in a single colour.

In Grand Theft Auto: San Andreas, the Sanchez assumes a more modernized appearance, possibly based on a Honda CRM 250/Yamaha DT 200. This version is largely identical to the GTA Vice City model, but incorporates an upside-down fork and a square-shaped front fairing with a rectangular headlight. The main body appears to feature additional body panels partially covering the engine bay and a longer seat, while the engine features a more detailed texture. The rear fender has larger side covers and the swingarm features a suspension spring. Again, all the bike spawns in a single colour, with additional grey textures over the front fairing and the side covers.

It should be noted that all renditions use wire rims and medium-profile tires with knobby treads, although the GTA San Andreas rendition assumes a smoother shape on the wheels.

The Sanchez is mostly similar to the GTA San Andreas model, retaining most of the distinctive features. However, the vehicle assumes an hexagon-shaped front fairing, different side engine covers, a lower cover for protection of the engine bay, covered front transmission sprocket, wider rear side covers and a smaller tail light mounted below the end of the rear fender. The exhaust pipe appears to have carbon-fiber section on the engine bay and the muffler, while the seat bears manufacturer badges on the rear edge. The bike is also decorated with green "Sanchez" markings on the sides, another green marking on the central handlebar frame and brown details on the sides, along with Terroil decals on the front fork legs and the aforementioned "GP-450" markings on the rear side covers.

The bike is prominently painted in a primary colour, with the front fork legs, part of the front fairing, the grilled parts over the intercooler and the rear side covers painted in a secondary colour. Again, it uses a set of black wire rims with medium-profile tires and knobby treads.

The Sanchez in Grand Theft Auto: Chinatown Wars seems to assume a similar design to the one in GTA San Andreas and GTA IV, but lacks any sort of fairing. The bike can be seen in a variety of colours, but lacks any livery.

The Sanchez returns in Grand Theft Auto V and Grand Theft Auto Online and appears to be unchanged from GTA IV, but adds two long frames over the swingarm intended for the passenger's foot pegs. Some changes were made to the livery, where the fork legs are permanently white and bears Terroil and Auto Cowboys markings, while the front fairing has a permanent white square above the light and a white "Sanchez" marking below it. The central frame on the handlebars bear a "Maibatsu" marking on the front and the sides appear to use a slightly worn-out livery, consisting of a black paint with yellow "Sanchez" and "GP-450" markings on it. The rear side covers are also permanently white and bear "Maibatsu" markings at the bottom.

Colour distribution is drastically changed, where the primary colour is applied on both fenders and the Maibatsu marking on the central frame of the handlebars, while the secondary colour is applied on the front fairing, the grilled parts over the intercooler, the outlines of the rear side covers and the markings on the front fork legs and the bottom of the rear side covers. The bike retains the same wheel model as in GTA IV, appearing to be a derivative of the "Wires" rims available in Los Santos Customs.

The Sanchez is, handling-wise, excellent, having a great turning cycle, allowing excellent maneuverability.

Judging by the engine model it is likely powered by a single-cylinder engine, with a rather loud and weak engine sound. It is coupled to a 5-speed gearbox, and weighs an average curb weight of 500kg. The bike has the same handling files in all 3D Universe games.

The Sanchez has decent acceleration and top speed for a vehicle of its stature. It lacks the power of higher end motorcycles, yet is notably lighter and easier to control in unfavorable circumstances. Off-road, the Sanchez is one of the best motorcycles for off-roading, experiencing next to no loss in speed or control when heading off-road. The Sanchez is also a notably good wheelie-ing motorcycle, and benefits strongly from wheelies for speed at higher speeds. However, the motorcycle is notably fragile, taking only a few direct hits before being disabled.

The Sanchez is powered by a single-cylinder engine with a displacement of about 450cc (given the "450" marking on the sides), coupled to a 4-speed gearbox. Its engine sound is loud and idle revs are relatively low (being the stereotypical one of an underbone motorcycle). It is also the only bike in the game that uses a kickstart animation upon aboarding the bike, even though when turning the engine over an electric starter motor can be heard.

The Sanchez's data remains unchanged, bearing an identical top speed and acceleration rate. However, due to GTA V's alterations to handling, the Sanchez is even more agile, and cornering is superb. Pulling wheelies also takes less effort, albeit with more risk of pulling a wheelie too quickly upon set-off, risking the player falling off. The Sanchez can climb near-vertical hills, although the more vertical the player goes, the slower the Sanchez will perform.

Again, the Sanchez is powered by a single-cylinder engine with a displacement of about 450cc and coupled to a 4-speed gearbox. The engine sound is similar to the one in GTA IV, albeit with a higher-revving and smoother tone.

A group of racers in Sanchez bikes in a pre-release screenshot.

Franklin jumping off a dirt ramp in a Sanchez. 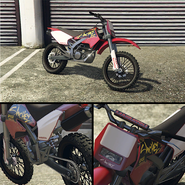 The Sanchez on the updated Rockstar Games Social Club.

The Sanchez in the cinematic preview on GTA V Rockstar Games Social Club.

The Sanchez in the cinematic preview on GTA Online Rockstar Games Social Club. 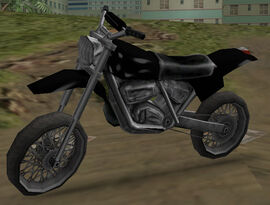 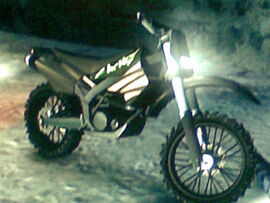 A black Sanchez in The Ballad of Gay Tony.