Grand Theft Auto: San Andreas
“The Triads are another small San Fierro gang based in Chinatown. They are lead by Wu Zi Mu and Ran Fa Li and have a big problem with the Da Nang Boys. The Triads are always looking for new business opportunities, and ways to make money such as the running of a Betting Shop and eventually the Four Dragons Casino.”
— GTA San Andreas description

The San Fierro Triads are a gang in Grand Theft Auto: San Andreas, originating from Hong Kong, who have since moved to San Fierro.

There are three Triad factions in San Fierro consisting of a set hierarchy with small sets answering to larger sets; the Blood Feather Triad, which would later be slaughtered by their rivals, the Da Nang Boys; the Red Gecko Tong, which is led by Ran Fa Li; and the Mountain Cloud Boys (山雲男孩). The most prominent gang in the group, the Mountain Cloud Boys, is operated by the blind Wu Zi Mu and answers to the Red Gecko Tong.

In addition to their bases of operations in San Fierro, the Triads also own and operate a casino hotel venture called The Four Dragons Casino on the southern tip of The Strip in Las Venturas; ownership is shared between Wu Zi Mu, Ran Fa Li and Carl Johnson. Because of intense Mafia pressure in the city, the Triads attempted to flex their muscles to show the Mafia that they can hold their own casino on The Strip. While the Triad's primary business is gambling, Wu Zi Mu has shown motivations towards robbery and street racing.

Triad members don all-black suits or all-grey suits. The Triad gang members appear on the streets in Chinatown, the most northern tip of King's and Calton Heights in San Fierro. Strangely, they do not appear on Las Venturas streets, even areas surrounding the Four Dragons Casino, although they can be seen on several cutscenes and missions. They usually wield AK-47s and pistols, however in certain missions they can be seen with different guns.

The San Fierro Triads gang members are seen driving Elegys, Stratums and Sultans. They listen to the radio station SF-UR.

Carl Johnson, having been exiled from Los Santos after the fall of the Grove Street Families, works for Wu Zi Mu's faction and helps them destroy the Loco Syndicate and neutralize the Da Nang Boys. In return the Triads aid Carl in robbing Caligula's Palace, give him a share in The Four Dragons Casino, and help him in seizing Madd Dogg's mansion back from a Vagos drug dealer so the Grove Street Families could spearhead their return. The mansion serves as CJ's own base of operation in his return to Los Santos.

Other ranks exist, though they are not mentioned in the script, they can be implied to exist as well;

In the cutscene files there are two unused models called cstriada3 & cstriboss. The first model looks similar to the Triad's second member except that he has full hair and a moustache. The second one, looks instead like an old Chinese man wearing a purple-gray suit.

Triads' member, found in the cutscene files. His internal name is cstriada3. 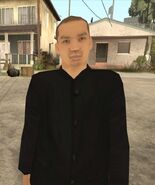 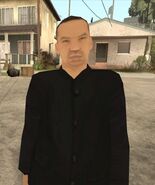 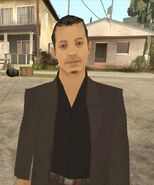 Triads attacking GSF Turf due to the glitch.

The beta version of the Triads. 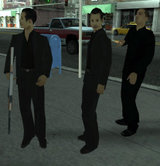