The San Fierro Rifa (or Rifa) is the sole Mexican gang in San Fierro led by T-Bone Mendez.

Relationships with other gangs

Rifa had strong dislike towards other Mexican gangs in Los Santos, until they joined the narcotics business with Big Smoke and linked up with the Los Santos Vagos.

The Rifa and Vagos often deal with each other in narcotics as seen in the mission Wrong Side of the Tracks. They are also on unfriendly terms with the other San Fierro gangs - the Chinese San Fierro Triads and the Vietnamese Da Nang Boys, though confrontations of these gangs are rare, as their territories are far away from each other. And the focus of the Rifa is also not based on a gang war with the other San Fierro gangs but in narcotics business.

The only gang the Rifa has a strong dislike to is the Varrios Los Aztecas, who are well away from their territory, and in a different city. Although the Rifa are also known for various clashes with the Grove Street Families and member (and protagonist) Carl Johnson, they are normally not hostile towards the Grove Street Families (though the confrontations between the two is rare, but this can be noted as the gang is not hostile towards CJ unless provoked). They are the least threatening and violent on the streets: when the player (or any other gang) attacks them, they usually run, although they may come back and attack Carl and some armed Rifas will attack him (or the gang members) in sight, rather than running away from him (or them) briefly. Nearby Rifa will also question Carl on his gang-banging status, if the player chooses to respond positively - the Rifa will sometimes (but not always) attack as opposed to the Los Santos gangs who will almost always attack. They are never armed with any weapons on the streets, but will draw a Pistol if they are provoked with melee weapons, by answering positively or when crashing into their cars (although sometimes they will ram back instead). In general, the Rifa are completely neutral to CJ (except in missions), even after Mendez's death.

Rifa members nearly have the same turquoise color bandannas that Varrios Los Aztecas wear (the Rifas colors are slightly more vibrant) but are not to be mistaken as a Northern set of the gang as they do not like each other. Also, Rifa members are easily recognizable because of their baggy slacks. They have three different skins that will drive and patrol around their territories:

Despite the death of leader, T-Bone Mendez during the events of the game, the gang remains in existence in their turfs throughout San Fierro, although following the destruction of the Loco Syndicate and their crack lab, it is unlikely they are involved in the drugs trade any further as there is nobody else to supply them.

They make their final appearance in End of the Line where they were hired by Big Smoke for protection purposes of his crack empire in collaboration with the Ballas, Los Santos Vagos, and Russian Mafia. Ultimately, the Rifas, alongside the other gangs, are defeated. 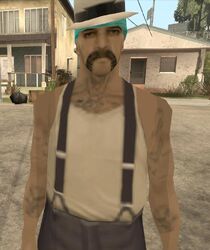 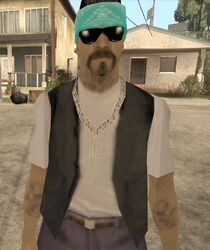 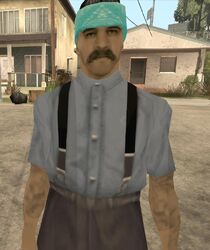 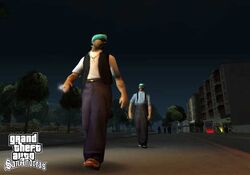 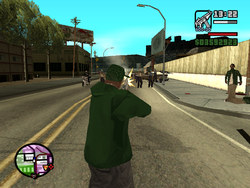 San Fierro Rifa attacking GSF territory due to a glitch 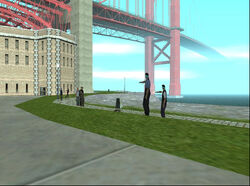 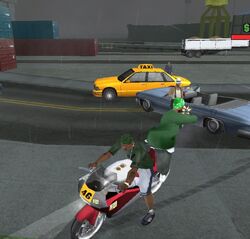