The SAPR is based on the California State Park Peace Officers and their units can be seen patrolling various areas of Blaine County such as the Chiliad Mountain State Wilderness area, the Paleto State Forest, the Grand Senora Desert, and Raton Canyon.

There is a Park Ranger's office located on the entrance road to the Raton Canyon trails.

They dress similarly to the Los Santos County Sheriff in appearance; they both wear green and/or brownish shirts and pants with a duty belt containing certain tools to help them perform their duties such as a radio, handcuffs, and possibly bear mace or pepper spray. They can also be seen wearing campaign hats or baseball caps. They patrol the parks driving a Declasse Park Ranger equipped with searchlights and a LED light bar siren.

Ranger identified by voice as Ranger Lewis in an arrest event.

Ranger unit on the scene.

Ranger unit on the scene of a possible drowning.

A female Park Ranger and her SUV.

A Park Ranger on the watch.

A male Park Ranger that spawns on certain occasions when the player switches to Michael at the Sisyphus Theater.

Rangers on the scene of a shootout in Harmony.

Sheriff Cruisers during a shootout in Harmony.
Add a photo to this gallery 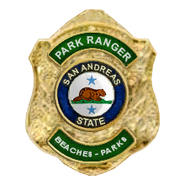 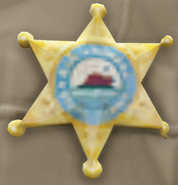 Retrieved from "https://gta.fandom.com/wiki/San_Andreas_Park_Ranger?oldid=1310034"
Community content is available under CC-BY-SA unless otherwise noted.