The San Andreas Emergency Unit (SAEU) appears to be a public medical service which only respond within San Andreas' major cities; Los Santos, Las Venturas and San Fierro, and will not respond to emergencies in far outskirts.

Their logo is seen on the side of Ambulances and is depicted as a traditional "Star of Life", albeit with the snake and pole replaced with what appears to be a sperm. Although the service doesn't have an "official" name or identification, "San Andreas" and "Emergency Unit" are found written on the Ambulance.

2 paramedics will spawn in an Ambulance in emergency situations. When arriving at the scene of a casualty, both the driver and passenger will get out and attempt to revive injured pedestrians.

San Andreas Emergency Unit paramedics will almost always successfully revive injured pedestrians if they are on time; only decapitated pedestrians cannot be saved.

Las Venturas SAEU Paramedic.
Add a photo to this gallery

Ambulances with their logo are used to respond to emergency situations, and can be seen parked outside hospitals.

They will spawn with or without unit numbers "37" or "71". Unnumbered units will simply show as "Unit". Unit number combinations "10" and "02" exist in the Ambulance's texture files but are otherwise unused.[2]

Despite the fact Ambulances are only seen responding in San Andreas' major cities, their Ambulances can be seen parked outside almost all of the hospitals within San Andreas.

No SAEU Ambulances spawn at Ivory Towers Drive-Thru Mental Clinic normally, but two will spawn, along with four Los Santos paramedics at the hospital during the mission "Madd Dogg".

* Denotes an Ambulance spawns outside this hospital. 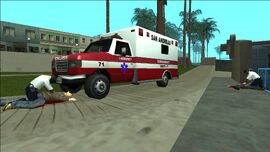 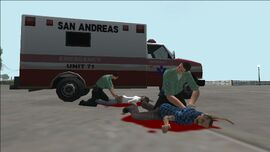 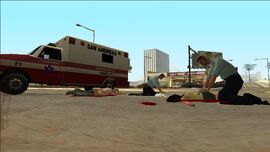 Retrieved from "https://gta.fandom.com/wiki/San_Andreas_Emergency_Unit?oldid=1217759"
Community content is available under CC-BY-SA unless otherwise noted.