Overview of the bridge.

Location on the map (yellow).

The bridge appears as a viaduct with a section of two solid ribbed arches atop its road deck. It carries two lanes of traffic across in either direction, crossing the Los Santos River as well as Popular Street in La Mesa and the Elysian Fields Freeway between La Mesa and Mirror Park. It serves as part of San Andreas Avenue and initially starts at the Sinner Street intersection between Mission Row and Textile City, and ends at the El Rancho Boulevard intersection in Mirror Park. Traffic from Supply Street can also access this road.

San Andreas Avenue Bridge appears to be based on the former Sixth Street Viaduct crossing the Los Angeles River, which was demolished in 2016.

The San Andreas Avenue Bridge passing over the Los Santos River serves as one of the 50 bridges for the Under the Bridge challenge which contributes towards the Close Shave Achievement/Trophy. 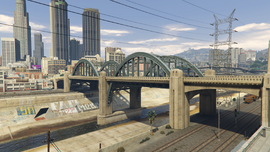 A view of the Los Santos River span. 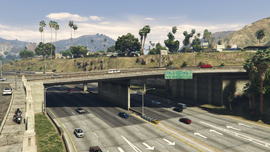 A view of the Del Perro Freeway span.

Bridges crossing the Los Santos River, from north to south