GTA Wiki
Register
Don't have an account?
Sign In
Advertisement
in: Cleanup, Characters, Characters in GTA III,
and 9 more
English

Salvatore was born in Palermo, Sicily. He once had a brother[1] and was also close to one of his cousins (later killed by the Sindacco Family)[6]. He immigrated to Liberty City and with his first wife (who died, presumably by 1992), had a son named Joey[2]. It is unknown whether Joey was born in Sicily or the United States.

He took over the Leone crime family after a power struggle in the mid 1980s[1], likely against his Uncle Leone[5] (as of 1998, they were supposedly at peace but heavily distrusted each other in secret). By 1992, he had purchased and moved into a mansion in Portland Beach, Liberty City.

Salvatore agrees to give the Sindacco Family $5 million to invest in Caligula's Palace, a mega-resort in Las Venturas, one third owned by each of them and the Forelli Family[8]. Salvatore negotiates control beyond his share, such as control of the books[9] and his choice of a supposedly neutral manager, lawyer Ken Rosenberg, that Salvatore could control[10].

While in Las Venturas, Salvatore befriends Carl Johnson, who had worked in a car theft ring for his son Joey Leone in Liberty City sometime between 1987 and 1992[11]. He slowly trusts Carl with bigger and bigger tasks, leading up to him taking a flight to Liberty City to kill Marco Forelli (Original Audio was deleted in the final release of the game for unknown reasons leaving his name unknown) at the Forelli-owned Marco's Bistro. However, Carl was a partner in the rivaling Triad resort, and robbed Caligula's. Salvatore discovers CJ's involvement in heist and then threatens to kill Carl and anyone close to him, although it is known that he never carried out these threats. It is then assumed that he left the casino and moved back to Liberty City.

During this time he also met Maria Latore[12], who (despite having a foul attitude with him from day one) quickly became his girlfriend and married him in the next six years, almost definitely for his money. Toni Cipriani became a well-ranked Leone member by 1994, when he killed a rival made man and went into hiding for the next 4 years.

“Toni, I know what you did and no one is more grateful than me, honestly. But the idea that you walk in here and start questioning my leadership right away is quite frankly...out of order. Capiche?”
— Salvatore Leone

After 1992, he returns to Liberty City. In 1998 he welcomes Toni Cipriani back to the city, after years of hiding, but assigns him to Vincenzo Cilli, a much younger and newer Leone member[13]. Toni and Vincenzo immediately dislike each other, and after Vincenzo betrays Toni, Toni kills him with Salvatore's apparent approval. In due time, Toni earned his current level of appreciation from Salvatore[14] by helping him with wrestling Paulie's Revue Bar away from Paulie Sindacco by assisting his discontent manager, JD O'Toole, extorting dock worker union boss Jane Hopper (Salvatore personally working with Toni at this point)[15], and after the union troubles were sorted out, attending an LCPD-ambushed meeting with the Colombian Cartel, escaping alive[16]. Toni ends up killing the Cartel dealers, with the exception of Miguel who survives, and gets away with the drugs.

After the earlier mob war is supposedly finished, Toni follows Sicilian Mafia representative Massimo Torini, who is trying to broker a peace between the three families, but in reality organizing the families as well as street gangs against the Leones[17]. After this, Mickey Hamfists, under orders from Sal, kills JD O'Toole for control of the Revue Bar, renamed Sex Club 7, by tricking him into thinking he'd be a made man[18].

Salvatore is slowly forced out of Portland by the Sindacco and Forelli families, as well as the up-and-coming Diablos and Triads. His paranoia briefly causes him to threaten Toni with a gun, before he comes to his senses[19]. Trusting in Toni again, he explains that the Forellis control mayor Roger C. Hole [20] who is pinning the entire city's crime on him[21], before escaping to a luxury condo Salvatore owns in Newport, Staunton Island.

Salvatore's first move is to murder Mayor Hole[22]and try to replace him with corrupt politician Donald Love, a business mogul in their pocket who's running for Mayor[23]. Toni also becomes a made man[24]before helping Donald Love with his campaign.

To try to win the three-way mob war, Salvatore recruits help from a corrupt LCPD officer, Leon McAffrey. Aside from Toni's work with Donald Love, Salvatore also personally digs up information about Franco Forelli and their connections to the Mayoral office, often risking his life to do so [30][31][32]. When Paulie Sindacco attempts a truce with the Forelli family, Salvatore very cleverly makes an attempt on Paulie's life while making his rivals go to war with each other again[33].

Eventually, Love loses the election to Miles O'Donovan because he is linked to Toni and Salvatore[34]. He blames Toni, goes bankrupt as he'd spent his entire $20 million fortune, and the two don't speak for a short while. To further damage the family's status, Salvatore is arrested and put on trial for all the crime in the city[35]. Posing as a lawyer, Toni receives orders from Salvatore[36], such as making allies with the Southside Hoods[37], finally killing Don Paulie Sindacco as he attempts to flee Liberty City,[38] and working to subdue their new Yakuza enemies.[39]

Salvatore is eventually found not guilty in court, after Massimo Torini's mobsters try to kill him [40]. Afterward, they actually try to negotiate peace when Salvatore insists on having his way[41]. Massimo Torini personally kidnaps Mayor O'Donovan, bringing him to the lighthouse on Portland Rock[42][43], where they kill Torini, rescue the mayor and force him to work for the Leones [44]. Salvatore then makes peace with his uncle and the old country,[45] before thanking Toni for his hard work and loyalty.[46]

Since his first trial in 1998 mentioned above, he had been tried in court another four times, winning each case. In April 2001, the final trial, he was accused of tax evasion (having $450,000 in undeclared income) before his lawyer Maurice Goldberg successfully convinced the court that Salvatore is dyslexic and struggled with taxes. He was only found guilty of importing tomato sauce from Sicily without a license and fined.[1]

In October 2001, Salvatore is still at war with the Triads and Diablos. Paulie's Revue Bar is renovated and renamed Sex Club 7, with Luigi Goterelli in charge. Claude, having gotten his start working for Luigi, is first introduced to Salvatore by Toni Cipriani at a meeting at Salvatore's mansion, and he sees great potential in Claude.[47][48] Maria, though still married to Salvatore, takes a serious liking to Claude. He also has Curly Bob, an employee at Sex Club 7, killed by Claude for selling information to the Cartel [49].

Claude supposedly earns ultimate favor with Sal after he and his friend 8-Ball destroy their SPANK factory aboard a tanker ship [50]. However, Salvatore becomes paranoid, makes a truce with the Cartel, becomes infuriated after Maria says she's "an item" with Claude, and sets a death trap for him before Maria warns him and helps him escape Portland. [51]

Claude, under the orders of Yakuza boss Asuka Kasen, assassinates Salvatore after he leaves Sex Club 7. [52] The Leone Family members will also become hostile towards Claude and attack him with shotguns and pistols if he returns to Saint Mark's.

This article or section needs to be cleaned up to meet the standards of the GTA Wiki.
Rename pictures to fit media policy 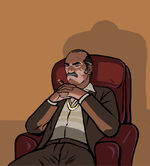 The alternate outfit Salvatore is seen wearing in The Introduction.

Salvatore in an orange jail suit.

Salvatore with Toni Cipriani circa 1998.

Salvatore Leone in the trailer for Grand Theft Auto: The Trilogy - The Definitive Edition.