View source
watch 02:59
Wiki Targeted (Games)
Do you like this video?
Play Sound
This article is about a mission in Grand Theft Auto: San Andreas. For the bistro in Saint Mark's, which the mission is named after, see Marco's Bistro.

Breaking the Bank at Caligula's
A Home In The Hills

Salvatore Leone: "Now it's time The Forellis really found out what it means to screw with Salvatore Leone. How would you like to hit the St. Mark's Bistro?"
CJ: "A hit in Liberty City? Cool, but I'm gonna need some backup."
―Salvatore Leone and Carl Johnson

Saint Mark's Bistro is the final mission in Grand Theft Auto: San Andreas given to protagonist Carl Johnson by Leone Family don Salvatore Leone from the office at Caligula's Palace, a casino located along The Strip in Las Venturas, San Andreas.

Carl comes to visit Salvatore Leone at the office in Caligula's Palace to find him and Maria throwing knives at a tied-up Maccer. Salvatore congratulates Carl on a job well done taking out a Forelli hit squad sent to kill Salvatore. In retaliation, Salvatore decides to send Carl to Marco's Bistro, one of the Forelli Family businesses, and assassinate Marco Forelli. Realizing the opportunity to free Paul, Maccer and Rosenberg, Carl asks Salvatore to let him take the three as back-up, to which Salvatore agrees, due to him thinking that Carl would kill them.

Upon exiting Caligula's Palace, Paul, Maccer and Rosenberg escape from Las Venturas, while Carl drives to the Las Venturas Airport and flies to Liberty City with a Shamal.

Several hours later, Carl takes a taxi to Marco's Bistro and kills every mobster present at the restaurant, including Marco Forelli. After some time, Carl is flying back to Las Venturas in the same Shamal he left in. As Carl lands on the runway in the Las Venturas Airport, the mission ends.

Salvatore Leone: "Everybody's talking about the job you did on that St. Marks Bistro."

Salvatore Leone: "And you, er, you took care of those three loose ends?"

CJ: "Yeah those poor saps ran into a little trouble along the way. You won't be hearing from Mr. Rosenberg again."

Salvatore Leone: "Good boy! Good boy! Now listen, you're going to have to keep a low profile or people will start to make connections, so let's keep our distance for a while, eh? I'll call you."

Woozie: "Hey, CJ, what's up with you? Are we doing this heist or are you going soft on me again?"

CJ: "Hey, check it. Them fools been shipped out of the Venturas, Salvatore think I'm cool, so it's on. I'll meet you back at the 'Dragons."

Sweet: "Not really. I'm stuck in a cell between two lunatics. And people keep trying to jump me. This shit ain't cool, partner. You lookin' after Kendl?"

Sweet: "That's a negative. I'm through hoping. Have a nice life, brother."

CJ: "Hold on man, I'm getting shit worked out for you, just hang in there. Sweet? SWEET? Shit..."

Carl Johnson heading towards Marco's Bistro in a taxi in a snowy Saint Mark's.

The Sentinel in the courtyard, with the number plate reading '4GEDIT'.

A close-up of the licence plate. 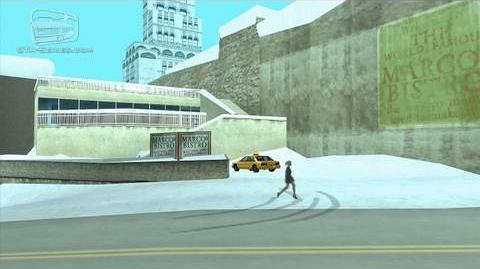 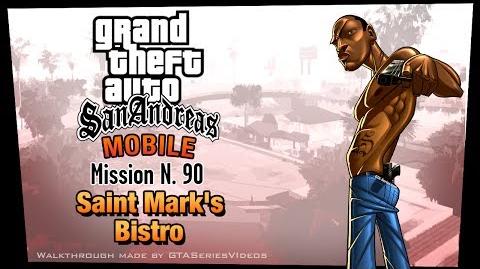 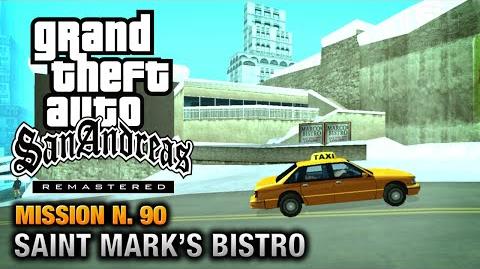