In-game time
“Our regular shipment of house chips got hit last week, and the owners are not happy. We've doubled up on security, but I still have a bad feeling about this one, could you head down there and give them the benefit of your... um... expertise?”
— Agatha Baker's briefing.
“We've been having trouble with our deliveries of house chips. We've hired the best security in the state, but I don't see any harm in doubling up. Could you tag along in case there's any trouble?”
— Alternative briefing.

Safe Bet is a Casino Work mission featured in Grand Theft Auto Online as part of the The Diamond Casino & Resort update. It is a freeroam mission given to the player by Agatha Baker.

Ms. Baker informs the protagonist of a shipment of house chips set to arrive in the near future. She says they've increased security since a previous robbery of chips, but she still asks the protagonist to go escort the security van to the casino.

The player is tasked with going to a semi-random location, such as LSIA, Cypress Flats, or Del Perro, where two security guards are waiting near a security van. Once the player arrives, the guards enter the van and proceed with driving to the casino. Shortly after, Agatha will inform the protagonist of a potential hit on the van, and after the text, enemies, such as Kkangpae or the Lost MC, will start attacking the van. At the bottom right of the screen, there is a "van health" bar, which will deplete as the vehicle is damaged.

The player has to protect the van from gunfire and other types of damage, and once the shipment arrives at the casino, the mission ends and Agatha calls the protagonist to commend them on their good work.

“Good work, I knew we needed you on this.”
— Ms. Baker
“Thanks. We couldn't afford to lose another shipment.”
— Alternative call

“We just got a tip off - someone might be about to hit the shipment. Stay sharp!”
— Shortly after starting to escort the van. 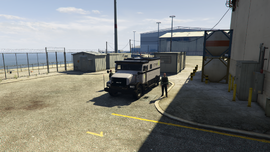 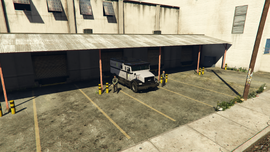