Sadler
Sadler2
“The ultimate pickup, the Sadler is the gas guzzling sidekick to the Pißwasser chugging survivalist.”
— Career Builder description.
“No problem getting a pair of 300lb tweens in the back of this bad boy... The Vapid Sadler is a full-size pick-up for full-size Americans. The best-selling and least fuel-efficient vehicle in the United States for over 20 years.”
— Southern San Andreas Super Autos description.

The overall design of the Sadler has focused around Ford's line of pickup trucks, appearing in GTA San Andreas as a two-door pickup truck and returning to GTA V as a four-door crew-cab pickup truck. In GTA V, elements such as the frontal fascia and rear lights from the Sadler are reused in the Sandking XL and Sandking SWB as well as the Liberator.

The Sadler appears to be based on a 1971 fifth generation Ford F-250, but the placement of the grille is similar to 1970s era International Harvester pickup trucks.

The Sadler is one of the lower class pickup trucks available in the game, and functions as a farm truck, resulting in it appearing more frequently in rural regions of San Andreas. Like certain pickup trucks in the game, the Sadler will come with loads on its truck bed, such as oil drums, Sprunk cans, or wooden crates.

The Vapid Sadler features a linear theme and appears to be primarily inspired by North American styling featured on the first generation Ford F250 Super Duty. The front fascia and taillights appear to be based on the third generation GMC Sierra, with the grille being split like that on the similar Chevrolet Silverado. It only comes in crew cab variants. The Sadler commonly functions as a trailer towing truck or a work truck.

The front of this truck illustrates the linear theme of the truck's design; the most distinct feature of the front face is the large, chrome-edged rectangular grille. The manufacturer emblem is located centrally, above a chrome horizontal strip. The headlight units are adjacent to the grille and are rectangular in shape. Beneath the grille and headlight units is the front bumper, which protrudes from the front face more than the grille. The hood of the truck features an elevated area whose edges are formed by boundaries that run from a corner of the grille to the windshield (parallel to the body's edge).

The sides of the truck further reinforce the linear design theme; being formed from a number of straight lines. The lower area of the body is elevated, with edges parallel to the base of the body. The truck features flared wheel arches to create a more muscular appearance. The main body line that splits the lower body from the upper body is entirely straight. The main body line runs from just above the top of the headlight units across to the rear face of the truck. Like the F250, the side windows of the truck feature a step near the A-pillar. In the small stepped area, wing mirrors are mounted on a polymer insert. The greenhouse is also a linear formation and the roof features five small lights near the front. The rear windshield of the cab is split into three sections. Behind the cabin area, a roll bar may be fitted to the load bed. The truck features side steps which span the cabin area. The truck features industrial-style wheels, wrapped in medium profile tires.

The rear of the truck completes the linear theme; having an entirely rectangular rear face. In between the main body line and elevated lower body area, the rear light units are placed. The rear light units are rectangular and placed on the corners of the body, they appear to be split into four sections. The rear bumpers at the base of the rear face protrude further than the elevated area.

The Sadler has a rear tow hitch, which is able to tow several trailers:

The Sadler can spawn with a number of extra components, none of which are available at Los Santos Customs:

Both the Sadler and the North Yankton "Snowy" Sadler share the same spawning colours.

The truck's performance is the inversion of that of the Bobcat, with poor-to-moderate speed and acceleration, but superior handling, stability and off-roading capabilities due to its higher ground clearance.

The engine model appears to be an inline-4 (4 cylinder), mounted transversely, similar to that of the Bobcat.

The Sadler has average acceleration and a decent top speed. However, the truck's large turning radius is very wide, and needs a lot of braking to corner around sharp bends. This is made up for by the Sadler having great durability. The truck performs pretty well off-road due to a high ground clearance, and a torque loaded engine to haul its weight up steep hills.

The Sadler is powered by, what the cover suggests, a V8, true to the badging that says it is a 5.4L V8. Said engine is coupled to a 5-speed gearbox in a front engine, all wheel drive in a 1:4 ratio. The engine sound is of a diesel-type engine, similar to that of the Granger and its variants.

Three varieties of the Sadler in traffic in GTA V.

The Sadler in a promotional screenshot of the Gunrunning update, towing an Anti-Aircraft Trailer. 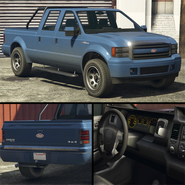 The Sadler on the updated Rockstar Games Social Club.

Exclusively seen in the mission Bury the Hatchet, this variant bears an identical body design but is covered in snow and sports tire chains. The snow Sadler doesn't spawn with any of the original extra components such as the brushguard and roof rack, though it always spawns with a bedcap. This version also lacks badging on its grille and front fenders.

This variant can be obtained but cannot be removed from the immediate vicinity as the mission requires the player to return to the Asea in order to progress through the mission. 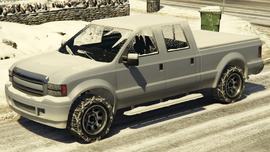 The Sadler is one of the most common pick-up trucks in the game, and will frequently appear towing small trailers and the Boat Trailer.

The Sadler is part of vehiclemodelset "CARS_CONSTRUCTION" which commonly appears driving in and out of construction sites or parked around them.