"Tricking out a near-perfect muscle car like the Sabre is a fine art. A mainstream mod shop won't understand that its deafening wheelspin isn't inefficient - it's the foreplay a car like this requires. Its brakes aren't dangerously unresponsive, they're smooth and gradual. The lack of protection isn't careless, it's thrilling. Luckily for you, here at Benny's we can serve a whole lot of style without adding one tiny bit of substance. It's what a car this stupid deserves."
―Benny's Original Motor Works description.

"Tricking out a near perfect muscle car like the Sabre is a fine art."
―Promotional image description.

The Sabre Turbo Custom appears as a lowrider-styled muscle car based on the Sabre Turbo. The vehicle's most notable changes appear in its rim design and ride-height. Upon first upgrading, wire-wheels with triple-spoke center caps will replace the standard wheels, and the tyres also become much lower in profile, enhanced by white-walls. Its underside is now fitted with a paintable frame and has a visible driveshaft, a different exhaust setup (dual pipes instead of a single Y-splitted pipe) and visible hydraulic bars connected to the suspension.

Most of the modifications from the standard model remain available for the custom version, but the nitrous oxide canister will no longer be present if a Roll Cage is added, nor will the passenger seat be removed if a Stunt Cage is installed. The Wheelie Bar option is also no longer available.

The performance of the vehicle appears to be almost identical to that of the stock counterpart. However, it appears to be slighty heavier and, due to its lower ride height, the vehicle will suffer from crashing at low-level obstacles. By using the lowrider mechanism, the car will likely sort sidewalks and small obstacles easily, at the expense of increasing chances of flipping it at certain occurrences of jumping on a ramp and taking corners. 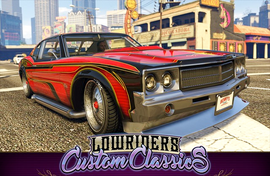 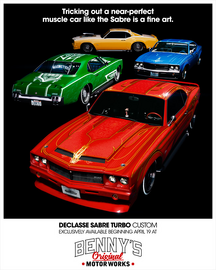 Retrieved from "https://gta.fandom.com/wiki/Sabre_Turbo_Custom?oldid=1182923"
Community content is available under CC-BY-SA unless otherwise noted.