SPANK is a drug first introduced in Grand Theft Auto III. This drug is most likely based on cocaine, as it comes in a white, powdery substance (the hidden packages in Liberty City are also white powder). It also shares similarities with meth, in that it takes a serious toll on the user's sanity (as seen in Kingdom Come). Produced by the Colombian Cartel and brought into Liberty City through several ways, the drug serves as a plot device throughout GTA III.

The drug is first mentioned during the mission Don't Spank Ma Bitch Up, where a local thug is supplying Luigi Goterelli's prostitutes with the drug, which Luigi feels is bad for business. As revealed in Farewell 'Chunky' Lee Chong, SPANK is also found to be channeled though the local Triads, as "Chunky" Lee Chong sells it at his stands in Chinatown. In the mission Kingdom Come, "SPANKed-up madmen" with bombs attached to their chests attempt to kill Claude in the Liberty Tree parking lot, a plan devised by the Uptown Yardies and Catalina. Then, in mission Espresso-2-Go!, where Columbians sell SPANK disguised as "Kappa Coffee House" stalls throughout Liberty City. In an attempt to disrupt Catalina's operations, Asuka Kasen instructs Claude in S.A.M. to blow up an incoming shipment of SPANK (described by Asuka as "Catalina's poison") and collect the loot for Asuka.

In Grand Theft Auto: Liberty City Stories, Rise FM DJ Boy Sanchez says that he tried out a new drug on the streets called SPANK which suggests that the drug was present at least since 1998.

In GTA III, an unnamed man addicted to SPANK (and clearly under its influence) calls Chatterbox FM to tell Lazlow Jones about a conspiracy theory involving toothpaste being used by the government to control people.

Closeup of a SPANK bomber in "Kingdom Come". 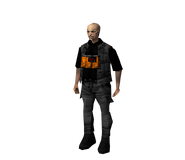 SPANK bomber in the Definitive Edition. 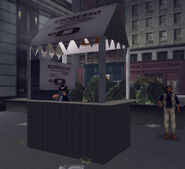