No
“The ultimate purse filler: if you want to make Saturday Night really special, this is your ticket.”
— Weapon Workshop and Social Club description.

The Shrewsbury SNS Pistol Mk II is a small handgun featured in Grand Theft Auto Online as part of The Doomsday Heist update.

The weapon is the Mark II version of the SNS Pistol, which is now based mostly on the AMT Backup, but with a straighter trigger guard. It also has what appears to be a pocket clip on the left side of the pistol.

The SNS Pistol Mk II slightly improves over the regular SNS Pistol in damage (from 28 to 30), with the same rate of fire. However, it is still outperformed by most of the other handguns, including ones without Mk II upgrades, and by extension, almost every other gun in the game.

The weapon can be fitted with a Mounted Scope, which slightly increases the zoom level, while the Compensator slightly reduces recoil, making it a bit more efficient when tapping the firing button.

The weapon has access to the following ammo types:

Note that specialized ammo magazines retain the standard capacity of 6 rounds, although overall capacity is reduced to 240 rounds (30 magazines). 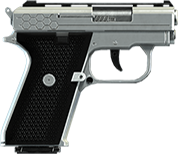