No
“Like condoms or hairspray, this fits in your pocket for a night on the town. The price of a bottle at a club, it's half as accurate as a champagne cork, and twice as deadly.”
— Ammu-Nation and Social Club description.

The SNS Pistol resembles the Heckler & Koch P7M10, with some design elements from the Colt Junior 25.

It is one of the smallest firearms in the series, with the barrel being as long as the grip and trigger guard. It has wooden details on the grip.

The SNS Pistol is described by Rockstar as a "compact yet deadly" gun. It has an average performance in comparison to other low-grade pistols. It is fairly powerful, but lacks basic accuracy and has very short range, the shortest of all non-shotgun firearms. Due to the very small base capacity of the weapon, a full magazine in the chest may not be enough to kill a player. When fighting an NPC with the SNS Pistol, it usually takes about three body shots to kill.

Overall the SNS is outclassed by every single gun in the game and the only applicable use of it would be to steal another weapon. It can be modded to use an extended magazine, doubling its ammo capacity from 6 to 12 rounds. The weapon model indicates that it is chambered in ".45 ACB". 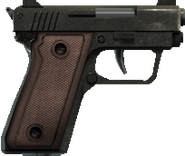 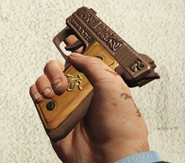