The Benefactor SM722 is a vehicle featured in Grand Theft Auto Online as part of the continuation of The Criminal Enterprises update, released on August 4, 2022, during the SM722 Week event.

The SM722 is mainly based on the 2009 Mercedes-Benz SLR Stirling Moss (Z199), featuring the similar overall design, open-top speedster cockpit, and large centre bonnet badge. The SM722 also features elements from other Mercedes grand tourer models, such as the grille taken from the 2003-2009 Mercedes-Benz SLR McLaren (C199/R199), and the side vents from the 2013 Mercedes-Benz SLS AMG Black Series (C197). The headlights are similar to the ones found on the Surano, which are based on the 2013-2019 Jaguar F-Type (X152). The front bumper is a mix between the Ferrari SF90 Stradale and Pininfarina Battista.

The vehicle assumes an open-top design similar to the Ruston and the Locust, and a seemingly large profile similar to the Schlagen GT. The front end has a pointy shape and features small splitters on the outer edges that are finished in black/plastic, a black/plastic section on the centre and a mesh intake spanning almost the whole width. On the upper half, there is a central intake that is shaped like the manufacturer emblem and bears silver/chrome details, dual mesh grilles with a single horizontal element beside the central area and black headlamp housings on the outermost edges, each one having circular main units, L-shaped strips working as the high-beam units and vertical amber strips next to the high-beam units. The bonnet area has impressed formations where the dual grilles are located and has small vents beside the headlamps and larger intakes near the cabin area, with an additional narrow intake on the centre. The same bonnet hinges from the front and opens to reveal the black supports on the front, the engine bay and additional side-vented sections near the cabin area.

The sides of the car are denoted by impressed areas between the front fenders and the main doors, curved formations around the rear section and impressed formations on the rear quarters. The front fenders house black inset panels with single horizontal separations and small exit vents, while the doors have painted handles and painted mirror shells. The cabin area has a curved elevation for the dashboard cluster, while the area behind has protruding formations with large loops. The boot lid opens to reveal the black supports and a black carpeted finish.

On the rear end, the boot lid bears the manufacturer emblem on the centre and a dedicated section for the number plate, while the outer areas house large red tail lamps alternating between the main and brake units, together with white reverse units on the lower sides. Depending of the spoiler option, a functional third-brake lamp is mounted on the centre of said spoiler. The bottom area bears a trapezium-shaped opening with twin-exit exhaust tips, dual mesh exit vents beside the centre and a large black/plastic diffuser with large fins. The underside of the car is fully plated.

The interior of the car is unique and is predominated by silver/chrome details around it. There are small aircon units on the edges, a black panel on the middle and dual aircon units with a CD player on the centre, while the driver-side area houses a small cluster with two large main dials, a small fuel gauge above and the warning lights below. The central section of the car bears the radio set, cup holders and an automatic gear shifter, while the Benefactor logo can be seen on the horn cap and on a carbon-fibre plate located on the back, between the seats.

The car is powered by what seems to be a V8 engine, emulating the one from its real-life inspiration. It is coupled to a 5-speed gearbox and powers the rear wheels, and emits a sound similar to the Schlagen GT (itself being a variation of the one from the Schafter V12 and the Nightshark).

The SM722's performance is mediocre for the Sports class. Its acceleration is decent. It has a rather high top speed, but it lacks the high downforce which several of its rivals, such as the Corsita enjoys. While the car is fairly easy to control and its handling is fairly predictable, it has a tendency to oversteer through corners if handled roughly. The car's suspension sits quite high and soaks up bumps in the road well, though this also may result in excessive body roll, further impeding its handling. Overall, while it is a relatively easy car to handle, drivers should take note of the lack of downforce and the body roll.

A silver SM722 seen in the update’s official artwork. 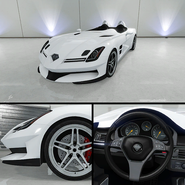 The SM722 on Legendary Motorsport.

The SM722 in the cinematic preview on Rockstar Games Social Club.