GTA Wiki
Register
Don't have an account?
Sign In
Advertisement
in: Pages with non-numeric formatnum arguments, Articles with sections under construction, New articles,
and 9 more

Euros (GTA Online)
Jester RR
RT3000
Futo
“As you take hold of the wheel, you feel it. That spark. The instant connection. A sports car soulmate with all the trimmings to live, grow and roll with. That's why, at SSASA, there's no such thing as mechanophilia. Only good drivers, bad drivers, and the graphic content warning on our public forums.”
— Southern San Andreas Super Autos description.

The Karin S95 is a sports car featured in Grand Theft Auto Online as part of the Expanded & Enhanced Edition of the game.[1]

The S95's general design is primarily based on the first generation Toyota 86/Subaru BRZ/Scion FR-S (ZN6/ZC6), with the wheels, as well the rear lights and spoiler, taking inspiration from the facelifted 2016-2020 models. It has a few styling cues from other iterations of the 86/BRZ; the front bumper (except the central intake) is derived from the 2009 Toyota FT-86, the 86/BRZ's original preview concept car, while the headlights, though shaped similarly to the first generation models, has the clusters from the newer second generation Toyota GR86/Subaru BRZ (ZN8/ZD8). The rear diffuser is taken from the Toyota GR Supra (J29/DB).

Initial teaser image of Hao's Special Works featuring an Astron Custom, an Arbiter GT, an S95 and a Cyclone II.

Another pre-release view of the S95.

A "converted" S95 with chameleon paint. 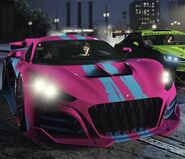 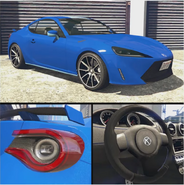 The S95 in the cinematic preview on Rockstar Games Social Club.