Standard White - 100%
“The S80RR was designed to do two things. First, to be the predominant endurance racer of its era. Second, to make so few concessions to the physical comfort and psychological wellbeing of the driver that getting as far as the end of your driveway risks multiple organ failure, an irrecoverable nervous breakdown, and absolutely no regrets whatsoever.”
— Legendary Motorsport description.

The Annis S80RR is an endurance race car featured in Grand Theft Auto Online as part of The Diamond Casino & Resort update.

The vehicle appears to be mainly based on the Nissan R90C, with the headlights apparently taken from a Jaguar XJR-9. It has various customization options that can make this car resemble the Nissan R89CP (by covering the wheel wells and customizing the front bumper) or the R92CP (with wing and front bumper customization).

The S80RR shares many design traits with the RE-7B, being the low profile and aerodynamic styling, but depicted with older features in comparison. The front of the car features a sloped profile with a squared-off bottom, having small intakes and ducts on the centre and near the cabin. Four circular headlamps, enclosed in glass casings with black fittings, can be seen on the outer edges. The front serves as an openable compartment that hinges from the front, and opens forward to reveal the front suspension setup and a radiator/intercooler.

The sides feature rounded front arches with square-shaped mirror shells, vertical intakes on the lower areas and side-exit exhausts near the rear arches. The cabin area is relatively rounded and narrower, featuring black surroundings on the windows and gull-wing doors. The rear area acts as the engine compartment, which hinges from behind the cabin and opens forward to reveal the engine bay, protective frames and rear suspension setup.

The rear area features circular tail lamps and thin vents, while the centre is occupied by a rear structure holding the race spoiler, and two rectangular reverse lights can be seen besides it. The entire underside of the vehicle is mostly plated in carbon fibre, featuring elevated sections running towards the rear end, while the front suspension arms are exposed.

The interior appears to reflect its classic design. While similar to the race interior from the RE-7B in terms of features, the S80RR employs two analog dials over the steering column (though the steering wheel contains paddle shifters rather than a traditional H-shifter), with various rearranges for the curved dashboard. What is also unique about the S80RR is having only one seat, and the seat and wheel are located in the centre, unlike many other cars that are usually located on the left side.

The primary colour of the car is applied on the bodywork and the stitching on the steering wheel, while the secondary colour is applied on the roll cage, chassis, engine covering and suspension springs. Similar to vehicles like the ETR1 and RE-7B, the S80RR features racing slicks with custom markings for the stock wheels, with the rims being similar to the "Dash VIP" rims available in Los Santos Customs, albeit omitting the details between the bolts and featuring a yellowish colour.

The S80RR's acceleration is surprisingly good for a rear-wheel-drive vehicle. Top speed is comparable with most super-class cars. The handling is almost one of a kind compared to other cars, with the ability to steer very sharply, and easily regain control if the car begins to powerslide. The car does not suffer much from instability when going over uneven roads thanks to its weight and downforce. Highly recommended with races that feature many sharp turns.

The S80RR has one (the eleventh) Advanced Flag enabled,[1] which prevents the vehicle from being slammed/stanced by shooting the wheels. After the Los Santos Summer Special update, it also forces the tire clipping boundaries on the vehicles' stock wheels when applying different wheel options with a bigger sidewall, thus preventing better bump-absorption when using Offroad wheels.

The vehicle is powered by a single-cam V8 engine, coupled to a 6-speed gearbox and powering the rear wheels. The engine sound is similar to the one on the RE-7B. 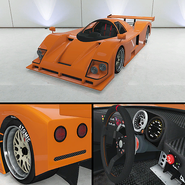 The S80RR on Legendary Motorsport.

The S80RR in a Cinematic preview on Rockstar Games Social Club. 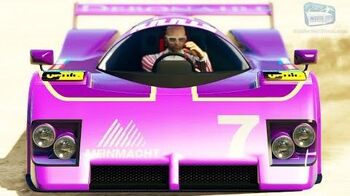