MC Eiht
This article is about the character. For the mission, see Ryder

Spoiler Warning: Plot details, ending details, or both are in the text which follows.
“I'm a motherfucking genius!”

Ryder is a high-ranking member of the Grove Street Families who later joined forces with the Ballas, Vagos and C.R.A.S.H..

Ryder is a drug user, something known by both Sweet and Carl, and he can usually be seen with or searching for his 'water', which is in fact PCP mixed with cannabis. During the mission Home Invasion he can be seen frantically searching for it in his garden, having already dug numerous holes with a shovel.

Ryder's short stature is often commented on by many characters, with Kendl, Cesar Vialpando and a Well Stacked Pizza Co. employee (among others) calling Ryder a 'midget'.

Ryder: "Hey, CJ, tell me why I didn't finish high school."
CJ: "Because you been dealing drugs, man, since the age of ten!"
Ryder: "No, that ain't it."
CJ: "(laughs) Because you went and put hands on that teacher for wearing Ballas colors!"
—CJ recalling why Ryder was kicked out of school during "Robbing Uncle Sam".

Ryder was born in Los Santos, most likely in Ganton due to his close relationship with Sweet and Carl Johnson. Ryder was expelled from high school for assaulting a teacher who was wearing Ballas colors, although Ryder claims he was 'too intelligent' for school. It is also revealed that Ryder has been a drug dealer since the age of ten.

At an unknown point in time, Ryder joined the Grove Street Families street gang, eventually rising through the ranks of the gang until becoming one of Sweet's closest allies, being helped by the departure of Carl Johnson in 1987 following his brother's death. The Grove Street Families, however, began to lose influence, power and money to their arch rivals, the Ballas, due to their stance against the sale of drugs, which was fueling the Ballas rise to prominence.

Big Smoke attempted to convince Sweet about the benefits of selling drugs but failed, later meeting Ryder in his house where he convinces him to join his newly formed alliance with the Ballas. The alliance is later expanded to include the Los Santos Vagos and Russian Mafia, while another was established with the Loco Syndicate, who began supplying the new alliance with drugs from their base in San Fierro, although they do not realise that an undercover government agent is involved in the operation.

The death of Beverly Johnson brings her son, Carl Johnson, back to Los Santos from Liberty City. Johnson meets Ryder again shortly after the funeral where they are attacked by a group of Ballas in a drive-by shooting, destroying Smoke's car. Carl, Sweet, Smoke and Ryder flee the area on BMX bicycles. The four cycle to Mulholland Intersection where Sweet breaks away from the group, distracting the Ballas vehicle, allowing Carl, Smoke and Ryder to escape. The three are briefly followed again by a Ballas car, although the Ballas do not aim their guns at Smoke and Ryder due to their clandestine alliance, a fact missed by the Johnson brothers. Smoke also refuses to shoot at a Ballas car performing a drive-by shooting, claiming he did not wish to waste the food they had just ordered, although Ryder does start shooting at the Ballas.

Ryder continues his life as normal with the Grove Street Families, often being seen with Sweet and Carl. He begins to hire Carl to do various tasks, the first being to drive to The Well Stacked Pizza Co. fast-food restaurant in Idlewood, where Ryder attempted to rob the store but was thwarted by the manager, using a shotgun in self-defense. Ryder later assists Carl to kill a drug dealer and then a number of Ballas gangsters who were associated with the dealer in a home in Idlewood. Ryder also hires Carl to help him steal weapons from the home of Colonel Fuhrberger in East Beach, steal a weapons shipment from a train coming from Las Venturas and to steal weapons from the National Guard Depot in Ocean Docks.

Ryder later accompanies Carl, Sweet and Smoke to the Cluckin' Bell fast-food restaurant in Willowfield, where they see a group Ballas attempt a drive-by shooting. The four survive and destroy the Ballas car. Ryder is again seen when the four discuss the gang's weapons and later performs a number of drive-by shootings with the three in East Los Santos and Jefferson. He also attended a party thrown by OG Loc on Grove Street.

Sweet later arranges a meeting at the Jefferson Motel between the various subdivisions of the Grove Street Families, in an attempt to bring the factions back together to fight against the Ballas.

Ryder, upon arriving with Sweet, Carl and Smoke, criticises the non-Grove Street gangsters, which Carl and Sweet do not realize is an attack on the gang rather than the subdivisions. Sweet enters the motel on his own and, when the Los Santos Police Department ambush the meeting, Ryder and Smoke flee the scene in Sweet's Greenwood. The two, however, later reappear at the side of the motel and escape with Carl and Sweet from the pursuing police, driving the car through a Sprunk billboard. The car explodes upon landing on the road below while the four, who had bailed out of the car, decide to go back home seperately.

“And there's that snake, Ryder. Look at that fool, hangin' out with the Ballas like they was life long pals.”

After Sweet explains to CJ that he is going to go to the Mulholland Intersection to ambush some Ballas members, Cesar Vialpando, the boyfriend of Sweet and Carl's sister Kendl and also a friend of Carl's, phones Carl and tells him that he must urgently come to an alleyway in Verdant Bluffs. Carl meets Cesar in the alleyway, where the duo witness Smoke and Ryder, along with C.R.A.S.H. officers Frank Tenpenny and Eddie Pulaski, and also some more Ballas members with the car used in the killing of Carl's mother. Deeply shocked, Carl finally realises the true colours of Smoke and Ryder and how they are complicit in his mother's death, but he is unable to confront the alliance between the game's three antagonistic groups (C.R.A.S.H., Ballas, Big Smoke/Ryder) and is forced to go to Mulholland Intersection to save his brother from a Ballas ambush during a shootout. Sweet is injured during the shootout, but Carl is uninjured and continues fighting the Ballas. The police arrive and the duo are arrested, with Sweet taken to a prison hospital 'upstate' and Carl to Angel Pine in Whetstone by Tenpenny, Pulaski and Jimmy Hernandez.

In the absence of both Sweet and Carl, Smoke and Ryder take control of the Grove Street Families and add them to their alliance. Tenpenny orders Carl to stay out of Los Santos or else Sweet will be put in danger. With both their leaders out of Los Santos, the Grove Street Families turf is taken over by the Ballas, with Families members now working for Smoke and Ryder by taking drug shipments from the Loco Syndicate drug manufacturing plant in Doherty, San Fierro back to Los Santos. Cesar Vialpando, however, later discovers this and informs Carl, who stops a number of the shipments from reaching Los Santos. Carl later moves to San Fierro, but with Cesar's help, later photographs Ryder and the other Loco Syndicate members doing business in the mission Photo Opportunity.

CJ: "You sold us out, Ryder. You fucked with us all!"
Ryder: "I'm a motherfucking genius!"
―Carl and Ryder, before the latter's death.

After obtaining the photographs, Carl returns to San Fierro and has them developed. He meets with Wu Zi Mu, a leading member of the Triads in San Fierro and his assistant Guppy, who identifies the three leaders as Jizzy B., a nightclub owner, T-Bone Mendez, the leader of the San Fierro Rifa, and the gang's leader, although they are unaware that he is an undercover government agent.

In the mission Pier 69, Ryder and Mendez are in a deal—after using Wu Zi Mu's Triad army to help subdue the gangs, Cesar and Carl kill Mendez. Ryder will then attempt to flee in a boat back to Los Santos; Carl can either snipe him whilst he swims to it, or he can chase him and shoot him down whilst seaborne.

Following Ryder's death, Cesar tells Carl that Ryder once tried to have sex with Kendl. Although Carl responded as a protective brother would, he still seemed to regret having to kill his lifelong friend.

Ryder is depicted as loud, wild, and unpredictable. He is known to go into rampages and always attempt the impossible. Ryder has a peerless mean streak and an extremely short temper, making him the loose cannon of the Grove Street Families. He also has delusions of grandeur and a possible Napoleon Complex, stemming from his short stature. He sees himself as a "genius" and thinks he is too intelligent for school. Furthermore, Ryder is also very brusque, as he rudely states his terse opinions of CJ since the latter's return to Los Santos and has the tendency to belittle him. Though Ryder is very passionate of the Grove Street Families, he is also easily convinced by Big Smoke to make a little cash despite the fact that it means turning on his own gang. Ryder's impulsive and wild attitude is possibly due to his drug addiction, for he is almost always seen holding a joint in each cutscene he appears in. Though his history is unknown, it is implied that he was once a rebellious and belligerent child due to CJ saying in the mission Robbing Uncle Sam that he once beat up a teacher just for wearing purple, which is a color used by the Ballas.

Despite turning on his own gang and CJ, in the whole series of events, including the deadly hunt on him by CJ, Ryder never shows any attempt to kill or harm CJ, even when the latter finally kills him in the mission Pier 69.

He commonly says "jeah/geah", which is a term commonly used by his voice actor MC Eiht instead of saying "yeah".

Artwork of Ryder and Sweet.

Artwork of Ryder, CJ and Sweet

Ryder, Sweet and Big Smoke doing a driveby shooting against the Ballas.

Ryder with a mask and no hat, only seen in the mission "Ryder".

Ryder along with CJ, Sweet and Big Smoke in a drive thru at Cluckin' Bell.

Carl about to kill Ryder.

Ryder doing the bras d'honneur to CJ before jumping in the water. 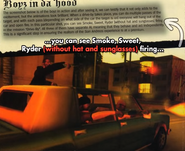