“You won't worry about trashing this all-terrain pick-up truck - it's pretty much trashed already. At this price, just be grateful that the brakes work.”
— Southern San Andreas Super Autos description.

The Rusty Rebel is essentially a rusted variant of the standard Rebel. While identical in design, it has rusty spots, patches and damage across the bodywork and rusty front bumper and side steps, in the same manner as many beaters. The interior is in a very beater condition similar to the Rat-Loader, with torn dash material and stains across the interior, and dirty door paneling, seats and steering wheel. It is also fitted with a CB radio, and occasional trucker chatter can be heard regardless of whether the main radio is turned on or off. The chatter will only play if playing as Trevor and in Blaine County.

Unlike the regular Rebel, this variant has access to rally/off-road modifications, which include assorted bullbars, extended wheel arches, and a variety of bed options including covers and roll bars. It is even possible to install a reinforced spaceframe that replaces remove most of the vehicle's bodywork and includes rallying equipment such as spare wheels, tool kits and additional fog lamps. With the space frame installed, the Rebel's quarter panels, bed floor and sides and tail lights are all removed, leaving the cab and front end intact (reinforced with additional framework), and rearranged suspension setup. The Rusty Rebel may also spawn with the same roll bar options as its clean version.

The general bodywork is painted with the primary colour, while the "REBEL 4x4" markings are permanently white, no longer assigning a secondary colour. The truck appears with the same eight spoke wheels wrapped in high-profile off-road tyres, albeit with a rusty condition on the rims.

The truck shares a similar performance with the regular Rebel, being a nimble and fast vehicle with good traction for off-road environments. However, it seems to have delayed ignition due to its rusty condition, similar to most beaters.

The truck is powered by the same V8 engine as its clean counterpart, and retains the same 5-speed gearbox and AWD layout (with a 30% front, 70% rear torque distribution). Unlike the clean version, the Rusty Rebel has a petrol engine sound that is much smoother, and valve/injection timing is more consistent, being similar to the Rat-Loader and the Duneloader (enhanced version). 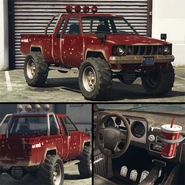 The Rusty Rebel on the updated Rockstar Games Social Club.

The Rusty Rebel with the Globe movie prop in GTA Online.