Standard White - 100%
“You may look, sound and smell like a corporate insurance analyst, but you live for the track. Your flabby, pimply ass is only at home nestled into a low-slung, carbon fiber racing seat. You fall asleep to fantasies of unconventional aerodynamics. You whisper 'monocoque' to yourself while you're jacking off in the shower. And there's only one name you scream out as you dump your load: Ruston, Ruston, Ruston.”
— Legendary Motorsport description.

The Hijak Ruston is a lightweight sports car featured in Grand Theft Auto Online as part of the Cunning Stunts: Special Vehicle Circuit update, released on March 21st, 2017, during the Ruston Week event.

The Ruston takes the appearance of a lightweight open-top track car, and is based on the Mexican styling of the VUHL 05. The front fascia is inspired by the one found on the KTM X-Bow.

The Ruston is distinguished by its boxy appearance, yet it still features an aerodynamic design and largely dominated by CFRP details. The front features a large carbon intake with two painted ducts on either side, a black splitter and a tow hook on the middle. The car appears to have LED headlights placed on carbon-fiber housings, along with the turning signals below. The hood area is mostly flat, with the fenders giving a bulky profile and featuring lightweight mirror wings over these.

The sides of the car have an angled profile near the front wheels and slowly become flat as they run towards the rear wheels. On the middle, trapezoid-shaped intakes run toward the rear vents and finished in carbon fiber, in addition to small carbon stripes and skirts. The cabin area features a bolted-on stripe with a small windshield attached. Behind the seats, there are two black rollbars with a fuel hose on the driver side and a central intake.

On the rear end, a diffuser is present at the bottom, along with the carbon details that predominate the rear end as much as the front end, together with the LED tail lights. A rear hook and a license plate are present on the center. On the upper side, a black compartment with carbon-fiber details is present, intended for the engine bay. The underside of the car is mostly covered by various bolted-on, carbon-fiber panels, with the front one leaving small room for the front wheels' steering. The underside also reveals the front wheels having more width than the rear ones.

The Ruston features an interior predominated by race elements, where the central section has a carbon fiber panel, starting from the dashboard and ending on the rear compartment. Two carbon-fibered bars stick out of the driver-side dashboard, holding the digital speedometer. The doors are reinforced by two steel tube bars on the inner side and featuring bolted-on panels, having door pull straps on it. The car also features racing seats with red seatbelts on them.

The car is painted in a primary color for the body, stitches on the steering wheel and the details of the stock wheels, while the secondary color is applied on the rear diffuser and the inner portions of the cabin area. Although inaccessible and not listed in the files, the vehicle's dashboard supports a trim color, which is always set to black and cannot be changed without the use of unconventional means (i.e. trainers). The wheels are similar to those from the Cheetah, being a variation of the "Cheetah R" high-end rims available in Los Santos Customs, although it lacks the bolt details around the center.

The Ruston has a relatively quick acceleration and nippy handling around corners, with the chance of an oversteer relatively slim. Its durability against collisions is surprisingly strong for a lightweight sports car, making it a good choice for freemode. However, its lack of traction around corners renders it ineffective as a racing vehicle. Furthermore, the openness of the Ruston makes the player very exposed to gunfire due to not having any roof covers for protection.

Given the black compartment on the rear, the Ruston appears to have a rear-mid engine, rear wheel drive layout, with a 5-speed gearbox. Its engine configuration, however, is not indicated, as the compartment does not open and there is no engine model. 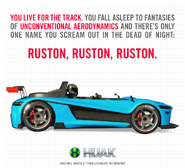 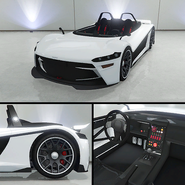 The Ruston on Legendary Motorsport.

The Ruston on the updated Rockstar Games Social Club.

The Ruston in the cinematic preview on GTA Online Rockstar Games Social Club. 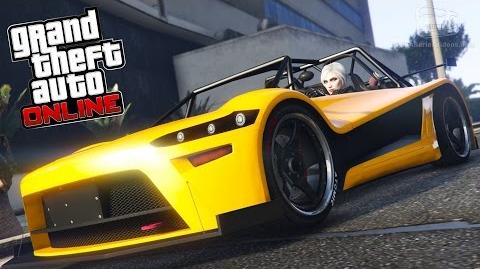