The Master and the Molotov
Shadow

In-game time
“But you messed up and left a lot of bad debt. You left a good friend of mine out of pocket, big time.”
— Dimitri Rascalov

Russian Revolution is a mission in Grand Theft Auto IV. It is the final mission given to Niko Bellic by Dimitri Rascalov.

This mission introduces the player to large scale shootouts and briefs on the cover system and blind fire.

After Niko and Dimitri agree to meet around the back of an abandoned warehouse in East Hook to collect the payment for Faustin's assassination. Little Jacob calls Niko to express his suspicion of Dimitri's motives and insists on joining Niko as backup in case the deal turns sour.

Niko meets up with Jacob around the back of the warehouse. Jacob will supervise the deal from a distance outside the warehouse whilst Niko enters to meet with Dimitri. When he enters, however, he sees Dimitri with Ray Bulgarin, a people smuggler Niko worked with in Eastern Europe, until he escaped in a botched trafficking operation.

Niko pleads his innocence to Bulgarin, though Bulgarin ignores Niko and claims that Niko betrayed him in the botched deal. As Niko is unable to repay what was owed to Bulgarin, Bulgarin orders that Niko be killed, and a member of the Russian Mafia attempts to slit Niko's throat. However, Niko fights back and is soon joined in the warehouse by Jacob.

Eventually, once enough thugs have been killed, a cutscene will show Rascalov and Bulgarin escaping. Niko kills the remaining thugs and escapes to the back of the warehouse, where the LCPD will be waiting for the player. Niko and Jacob then enter the latter's Virgo that is parked nearby and flee. After losing the police, Niko takes Jacob back to the Homebrew Café whilst both swear revenge against Dimitri.

After Niko drops Jacob off, he phones his cousin Roman to inform him of Dimitri's betrayal.

There is no reward for completing this mission. After completing the mission, Niko phones Roman, who asks Niko to meet him in East Island City. Following the conclusion of this phone call, the mission Roman's Sorrow is automatically unlocked.

The firefight that followed the meeting.

Escaping the police after the firefight. 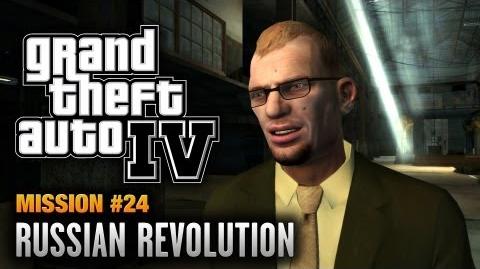