The Russian Mafia is a gang in Grand Theft Auto: Chinatown Wars.

They are seen driving their variants of Cavalcade FXT and Burrito. They can be found in certain areas, mainly in Hove Beach, their drug vans can be found on that area, where the player can steal them and take the drugs for themselves.

Exclusively to the PSP port, their Cavalcade FXT has a neon underglow. Their favorite radio stations are DJ Khalil and Ticklah.

It is likely the gang is made up of members of the Petrovic, Bulgarin and Faustin families from GTA IV. They are mostly involved in the drug trade, and appear in the mission Half Cut, trying to kill Huang Lee because he is selling drugs on their turf. The only two named dealers of the gang are Cazza and Borris. 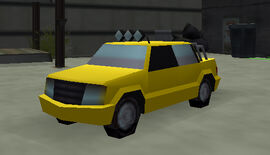 "Russian" variant of the Cavalcade FXT. 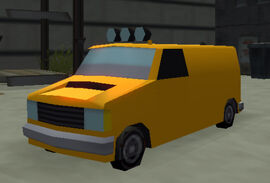 "Russian" variant of the Burrito.

Retrieved from "https://gta.fandom.com/wiki/Russian_Mafia_(GTA_Chinatown_Wars)?oldid=1270499"
Community content is available under CC-BY-SA unless otherwise noted.