Unknown
“People see a girl screaming in a wedding dress and they assume crazy! He's the crazy one, not me. Talk about anger issues.”
— Runaway Bride

The Runaway Bride is an unnamed minor character in Grand Theft Auto V who appears in the Random Event - Hitch Lift 4.

During her random event, the bride says that her groom used to be a rich and successful man, with an expensive car and a house in Vinewood Hills, and that he was nice to her sometimes. However, he also had some anger issues and she thought that she could change him after the wedding. However, as time passed, things only got worse; she commented that he slept with a hooker at his bachelor party and he did not regret it, saying that he had a "bro pass". He even told her that infidelity did not count if he was out of the state.

She also comments that his friends were no different than him, and that they were all drunk at the wedding. He was also a mommy's boy and the bride even says that she thinks there was some weird stuff between them.

The bride can be encountered by the player in Great Chaparral. She will be running away from the Hill Valley Church and screaming for a ride. After picking her up, she will tell the player to drive her to her house on Kimble Hill Drive in Vinewood Hills.

Mid-way to her house, her groom will appear in a Patriot, and will begin chasing the player and attempting to run their car off the road. If the player kills the groom, the bride will panic and run away, saying that the player is crazier than her groom. The best way to get rid of him is to get out of the vehicle and knock him out with any melee weapon, or alternatively use a fast vehicle that could easily outrun the groom's Patriot. Once he is knocked out or lost, just take the bride to her house and the random event will be over.

During the conversation with the bride, the reactions of the player will be different depending of which protagonist was used to do the random event: 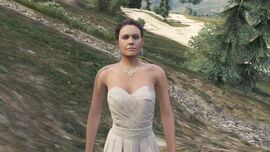 Appearance in the PS3/Xbox 360 version. 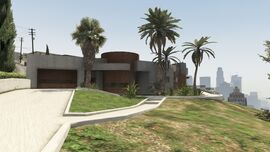