Standard White - 100%
“There was a time when the barest mention of the word 'Rumpo' sent a shiver down the spine of every kidnap victim and abductee in America. The Rumpo Custom adds a whole new level of utility to this beloved classic while staying true to those all-important roots. Flood lights, bullet resistant glass and a high ground clearance give you a fighting chance in the country, and a vogueish paramilitary flavor in town.”

The Bravado Rumpo Custom is a modified off-road van featured in Grand Theft Auto Online as part of the Further Adventures in Finance and Felony update.

The Rumpo Custom is a heavily customized variant of the Rumpo, which, while retaining its front fascia, the rest was severely changed. It is based on the Sportsmobile Classic 4×4, an off-road van that was built on a 2014 Ford E-Series chassis.

The Rumpo Custom makes use of several off-road modifications similar to the Merryweather version of the Mesa, as well as small changes on the body. The front of the car is largely dominated by a black utility bumper with a mounted guard, with two circular flood lights mounted on it. Both the grille and the headlights were retained from the original Rumpo, albeit finished in black.

On the sides, the bottom area features tubular side steps and has two sliding doors that opens in a similar manner to the Minivan Custom and Moonbeam, replacing the rear doors from the original model, as well as a small ladder on the rear left side. The cabin area appears to have small sunshades/deflectors on the door windows, and the roof features a full-size rack with four more flood lights on the front and a spare tire on the rear.

The rear end is mostly identical to the Rumpo, but there is a single compartment door with another spare tire mounted on the driver side, as well as a license plate on the passenger side. The tail lights are the same as the normal Rumpo, albeit placed on a lower height. A reinforced rear bumper with tail light guards can be seen as well.

The Rumpo Custom can be only painted in a single color, which also affects the stitching on the interior. The wheels share the rim color and design with the Brawler, wrapped in high-profile tires with knobby treads.

The Rumpo Custom performs much better than the standard model, since the off-road tires, combined with its high suspension, makes it much easier to drive over uneven terrains. The vehicle features bullet-resistant glass panes, giving the occupants temporary protection from gunfire.

A disadvantage of the Rumpo Custom is its heightened suspension; even with upgraded suspension, it is prone to tip over when cornering at high speed, partially due to being rather soft, noticeable when making a sharp turn or braking. Being a van, it has average top speed and acceleration, which may be problematic at evading enemies.

Like the standard Rumpo, the vehicle is powered by a single-cam V8 engine, coupled to a 5-gearbox in a front engine, all wheel drive layout. Its engine sound is also unique, being a higher-pitched and louder variation of the van sound commonly found on vans like the Speedo or the Youga. 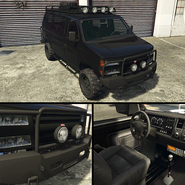 The Rumpo Custom on the updated Rockstar Games Social Club.

The Rumpo Custom in the cinematic preview on Rockstar Games Social Club. 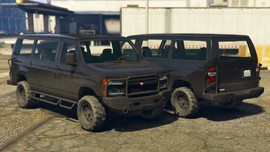 The Rumpo Customs in the Thermal Charges heist prep.