“What happens in the back, stays in the back. The No1 best-selling van among kidnappers and molesters for over 30 years.”
— Southern San Andreas Super Autos description.

The Rumpo is a van featured in the 3D Universe and HD Universe. It is manufactured by Bravado in the HD Universe.

The Rumpo is an average-sized van capable of carrying four passengers (two in the front, two in the back). It is common and can be found in most areas in the cities in which it appears, but like all vans, it tends to be most common in industrial areas.

In Grand Theft Auto III and Grand Theft Auto: Liberty City Stories, the van appears to be based on a first generation Dodge Ram Van, with the side paneling of a Ford Van. A design trait unique to this rendition of the Rumpo are the small 70's-style windows located at the rear of the van. A modified version of this van is used by the Southside Hoods gang.

The vehicle can come in four colors: gray, dark gray, white or red, occasionally with a Weazel News livery (despite not featuring any specialized equipment). The van also has an unknown window tint applied by default.[1]

As for the Heists Update, the Rumpo can be customized at Los Santos Customs to feature this Weazel News livery as seen in the photos below. 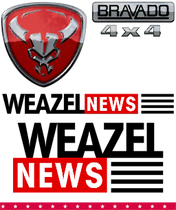 When originally introduced in Grand Theft Auto III, the Rumpo is fairly fast, but with average handling and a tendency to two-wheel and tip over under rough cornering.

The Rumpo in Grand Theft Auto V and Grand Theft Auto Online has average acceleration compared to other vans, but can be modified with a turbocharger in Los Santos Customs to bring it on par with the Ambulance. The Rumpo is somewhat agile and can corner easily at low speeds. Durability is average. An advantage of the Rumpo is its high ground clearance, allowing it to cover rough ground with ease.

There is some confusion regarding the names and designs of the Rumpo, the Burrito and the Pony throughout the 3D Universe.

In GTA III, the Rumpo chiefly resembles a Dodge Ram Van; in subsequent games, however, the Ram Van-derived vehicle is named Burrito. In GTA III, the Pony is a large van with an elevated roof; in GTA Vice City and GTA San Andreas, the Rumpo inherited this design, and the Pony was given a new one. 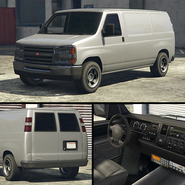 The Deludamol Rumpo on the updated Rockstar Games Social Club.

In GTA III, a unique all-black Rumpo with black trims appears during the mission Under Surveillance, as a vehicle occupied by two targets which the player must kill. To acquire the van, the player must open fire at the vehicle at close range using a gun, forcing the occupants to exit the vehicle; if shot from a distance, the driver may use the van as a weapon to run over the player, making the act of retrieving the van more difficult. Once the targets are killed, the player may take control of the vehicle and save it in a garage after the mission is complete. 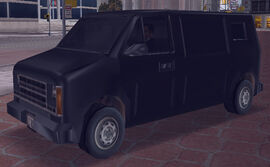 The black Rumpo obtainable during "Under Surveillance".

In GTA Liberty City Stories, a unique all-red Rumpo with red bumpers appears during the mission Bringing the House Down, as the van carrying explosives to be placed on the old subway tracks that runs under Fort Staunton. To acquire the vehicle, simply complete the mission in the van. 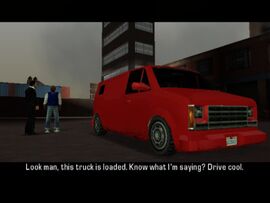 The red Rumpo obtainable during "Bringing the House Down".

A Deludamol-branded variant appears during the mission Mrs Philips, when Trevor is tasked to steal one for his mother. The capacity is limited to 2 due to the cargo load of Deludamol in the rear compartment. 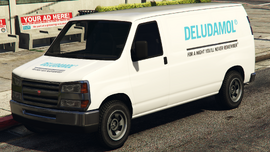